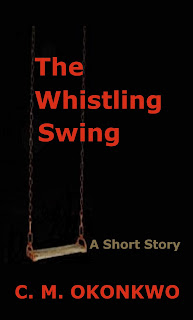 Halloween is here... so is my new Short Story 😁.

After 4 years, I’ve finally written my first horror story... well, my attempt at a horror story titled “The Whistling Swing.”

“A neighbourhood is disturbed by a whistling sound at night and concerned residents are going missing. The nonchalance of the landlord towards finding a solution raises Jerry's suspicion and forces him to identify the source of the noise and put a stop to it. Jerry must battle with the strange happenings around him to get to the bottom of the case, but first, he needs to figure out what’s real and what’s unreal.”

The Whistling Swing was initially a Flash Fiction story of about 300 words, which I wrote in 2014.
I was at my parents’ house writing a series of other stories when I first heard a whistling sound. It wasn’t disturbing but I heard it all the time during the day. I wondered what was causing it, but that’s where it ended... in my thoughts.

One day I heard it again, and out of curiosity, I went to the balcony to investigate. There was a playground on the other side of the road and I saw some children playing on a rusty swing, then I began to have ideas.

I returned to my laptop, created a folder, and in a new Word document, I wrote “kids playing on a rusty swing... make horror.”

A few days later, I wrote the flash fiction and my family/few friends loved it. I sent it in for an international horror contest, and although it wasn’t shortlisted, an editor reached out. He said he liked the story but the ending was confusing... I wanted to explain why it ended that way, but decided not to. It wasn’t meant to confuse but to leave readers thinking and imagining what would happen next.

I did nothing about the story since then until April 2015 when I first experienced hallucinations (during the editing phase of my realistic fiction novel titled "Twenty-One Days"). I had never felt anything like that before, so instead of getting worried, I laughed about it. You’ll never know what lack of sleep can make you see and hear (story for another day). It was after my fourth experience that I went back to write the story. I developed it further into 8 pages, and that was where it ended.

This year, I spoke about my hallucinations to a few people, who thought it was awesome, so I picked up the short story again and developed it even further. I took out time to recreate the plot, then when I began writing it, I couldn’t stop.

My goal was to release it on Halloween day (31st October), and I’m happy I’m able to meet the goal. My other goal was to write at least one horror story in my lifetime, and I'm also meeting it. Awesome, isn't it?

So what are you waiting for?

The short story is available on all ebook distribution platforms. Make sure you grab your copy and experience the book as you read it on Halloween day.

PS: As we celebrate Halloween and All Saints’ Day, let’s take out time to remember and pray for all our lost loved ones and the faithful departed.