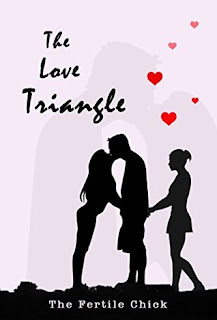 “The Love Triangle” is a romance novel by author The Fertile Chick.

The title tells it all, so does the description, and that was the attraction for this book. The idea as a whole was very nice, but the delivery could have been better. The book seemed rushed, but it was because 70% of it was a flashback from almost, if not more than 15 years back. That’s a whole lot of narration, and little to no dialogue, in some cases. A lover of dialogue, that didn’t cut it for me, as it made reading and memorizing names and dates a tad difficult. So unfortunately, it was a tough read for me.  At the same time, I know it's not quite easy to write a 15-year story without cutting out a lot of things, otherwise, the book would get too bulky and tiring.
I had a few othe issues with the book as well, the first being the title and description in relation to the story. The love triangle was meant to be between Fola, Jimi, her first love, and Dolapo (Dolly), her older sister, but the triangle broke when they all went their separate ways, and the story continued. It went on and on for over 100 pages, with Fola going on one disastrous date after the other until she conveniently runs into Lekan, also known as Lekushe, who we’ve never heard of before.
Coincidentally Fola remembers him from Unilag and NYSC, and remembers him trying to date her three times, but in the whole 15-year flashback, he never came up. If the author had mentioned him, even briefly, him running into Fola when one of her former dates, Shoga, embarrassed her, would have been a pleasant surprise not a random convenient meeting. In all of this, there was still no love triangle with Dolly anymore. I was expecting a continuous love triangle, but maybe I was expecting too much, because it later became a game for Dolly, just to hurt her sister, and not a genuine love triangle.
Other issues were editing errors and inconsistencies. I usually don't bother about them, but there were a lot and they became distracting. Another round of editing would easily solve the issue, but it might not be a big deal for others. For instance, a name changed from one page to another... like Anu, an aristo babe that changed to Arin in the next paragraph... I had to go back to be sure they were the same person.

There were also some unexplained bits in the story. Adun, Fola’s eldest sister is dating a boy that jumps bus and next thing we know, he's in the States, married to Adun... I’m not saying anything is impossible, but how did it happen? Did he win the lottery? Did he get a loan? Did he run away? He just mysteriously gets to the States and they are both there, happily married.

The book started to make some sense to me when I set my mind that it wasn’t about a love triangle but Fola’s life and relationships. I also liked how Fola’s mother came back to her senses and apologised for her unbelievable behaviour. I didn’t believe any mother would act that way, conspire to ruin one daughter’s marriage to the benefit of the other, so I guess repenting from such a way of life was a good addition to the story.

I also have a favorite line in every book I read, and this one was when Fola had broken up with Lekushe and was having a conversation with Jimi. Jimi had asked her if she had dated any other guys after Lekushe, and she said "No." She then asked Jimi "You?" And Jimi said, "No, no guys after Lekushe." Too hilarious.