Book Review: 30/30: Short Stories On Love, Life And Other Such Nonsense 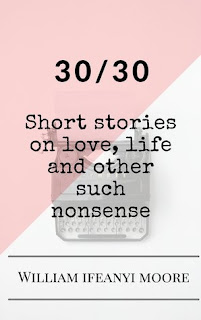 A collection of short stories discussing love, life, loneliness, culture, sexism, the human condition, sex and other such interesting topics.

Fantastic storytelling and writing in this collection of short stories. I loved the author’s play of words, the dialogue used, and the topics he wrote about. I liked the titles of the stories, and also liked that some stories were sequels to other stories. In the short but infrequent time I spent reading the book, I knew each character, so when their names came up again, I got excited to know what more they were up to.

The first short story “Lady In Waiting: A Tale Of Loneliness” was a nice one, and had a few twists in the just few pages that it had. I read it twice because I enjoyed it.
“Ade and the parents: on tribalism” got me cracking, I don’t know how many times I read it. When Ade commented on his mother’s fish stew and how he wanted her to cook it for him all the time, I knew trouble was coming, and the epic response from his dad was too funny... basically if Ade got serious with his relationships, he would have already settled down and be complimenting his own wife’s stew, not someone else’s wife.

“Leo and Anna: What Changed?” was another funny one. I loved the conversation, especially Leo’s revenge to Anna condemning his order for an espresso when they met for coffee. Anna’s remark? “Eww, that’s disgusting. I can’t believe there’s actually a market for espresso shots. If it was the cure to cancer, I’d still take my chances with radiation.” She goes ahead to order a hazelnut latte with lots of cream. Leo’s response? “If you wanted sweets, there’s a kids store down the road with a candy floss machine.” I cracked hard at the response, although I wouldn’t even get offended by that. You would always find me in those sort of stores eating all the candy floss. The rest of their conversation and banter was very nice. I read the story several times.

“Ken and Stephanie: Time and Timing” was also nice and funny. In fact, the beginning made me laugh. Stephanie asked “So when are you going to get a girlfriend?” Ken responded "Not now." Stephanie again says "That's why I said when..." and Ken says "And I gave you my answer. Not now. Or do I have to say it in Spanish for you to get it?" After that, he took a swig of wine and burped. Stephanie immediately says "You're disgusting. That's probably why no one wants to date you." Ken finally says, "Well, maybe you should be asking me when I would get some manners then..."

That conversation reminded me of a former colleague who burped every other second. I tell him to stop and he says that parents are expected to burp their babies after feeding them. I was surprised, and I wondered if he would ever get a girlfriend or get married, until I met his beautiful girlfriend, who didn't mind the constant burping. I had to tell my boss that I couldn’t sit in the same office with him. My boss laughed hard, as he thought my reason was ridiculous. No one believed me, until two different people, including my boss, came into the office to do something and were chased away by the constant, loud and irritating burping. (I never got another office though.)

In another story, there was a mention of Chimamanda Ngozi Adichie being depressed. It made me go online to check it out, and I realized that I must have slept all through 2015, as I wasn't aware there was a story on the topic. I was probably glued to my laptop, writing.

Another nice story was "Alfred and Felicia: A man’s world." But if I go on like this, I’ll comment on all the 30 stories of the collection.

There are some stories I didn’t really like as much as the others like “Man, Woman and Waiter: A Gender Story.” It was a nice topic, but not entirely entertaining for me.

The only other thing that threatened the flow of the story was the formatting and taglines. Sometimes it was difficult to know who was speaking in a dialogue because two sentences/dialogues were on the same line with no tagline. After going far in the dialogue, you would realize that the person you thought was annoying, wasn’t the annoying one; it was the other person. This happened a lot in “Brian and Brandon: One-drop Theory.” Names are almost similar, and with no clear taglines and new paragraphs between dialogue and thoughts, it was difficult to follow. It happened with some other stories too. But it’s nothing reformatting and a little editing can’t handle.

In all, I truly enjoyed the collection, and didn’t want to finish it. Great job to the author.