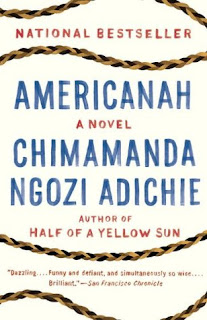 Ifemelu and Obinze are young and in love when they depart military-ruled Nigeria for the West. Beautiful, self-assured Ifemelu heads for America, where despite her academic success, she is forced to grapple with what it means to be black for the first time.

Quiet, thoughtful Obinze had hoped to join her, but with post-9/11 America closed to him, he instead plunges into a dangerous, undocumented life in London. Fifteen years later, they reunite in a newly democratic Nigeria, and reignite their passion—for each other and for their homeland.
***

"Americanah" is a novel in the Literary Fiction genre (I believe, as I am not really sure how to categorise it) by author Chimamanda Ngozi Adichie.

Chimamanda's books are always very difficult to get into. This one has been the most difficult so far. I started it and dropped it for two other books, then eventually decided to pick it up again. Plus the constantly going back and forth in time got tiresome, almost boring.

I thought it would pick up, but it never did. When I got to page 411, chapter 49, I knew that there was nothing to look forward to. It lacked spice... A lot of it. A regular Nigerian student who goes abroad to school has a more adventurous life with interesting stories, especially if things are not going as planned.

There was hardly any romance or love story in it, and it was almost unbelievable for both characters to still like each other after all that went down, which wasn't really much. The ending wasn't satisfying as well.

Sincerely, it would have been more captivating if the main character had blogged a guest story that turned out to be a confession to a crime that eventually helped police officers track down a killer. It would have added some suspense and mystery to the storyline. I don't know what else could have saved this book, but it didn't just work for me.