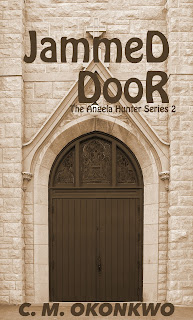 I'm happy to announce that I've just published the sequel to "Closed Door" titled "Jammed Door." It's juicier, funnier, more mysterious and suspenseful. It's the second volume of the Angela Hunter series. Yes, I enjoyed writing and reading Closed Door so I decided to write a second volume. You can read my post about Closed Door HERE.

After Angela saw what she thought was a body under Father Paul’s desk, she passed out. When she woke up, she realized the detectives had seen something else under the desk... Nothing! But Angela’s persistence made Detectives Slaughter and Pruitt come together again to solve the jammed-door mystery.

Father Paul started walking slowly, almost tiptoeing until he reached the door. He held both doorknobs in his hands, took a deep breath and yanked the doors open unexpectedly. Both of us jumped back as we saw a black thing fly out and roll onto the floor before scampering out of the office.

“What was that?” I asked Father Paul, still holding my chest, trying to catch my breath and steady it. It looked like an overfed rat. “And how did it get in there?”

“Strange, I must say,” he replied.

“What is? You mean whatever that thing was, and how it got in there? I know, right?”

“Yes, that’s strange. But it came in through that hole.”

Father Paul pointed to a hole at the top right corner of the storage room’s wall, just beneath the ceiling. I walked toward him and looked up at it.

“That little door,” he added, “Covers the hole, and it’s always locked. Now the strange thing is that it can only be opened from the inside.”

“So there’s no way the rat must have opened it from the inside, or opened it at all. Unless it has hands and can stand almost six feet high,” I added. “And where does the hole lead to?”

Father Paul didn’t reply. He pulled a stool and placed it by the wall, directly under the hole. And with both hands for support, he lifted himself up, high enough to look through the hole.

“It’s wet all over. I think the rat took a leak here,” Father Paul said, then laughed. “Rats do take leaks right?”

“That would be totally gross,” I complemented, muffling a laugh. “So where does the hole lead to again?”

“Umm, it’s the opening of an old tunnel that leads to the back of the church, just by the next street,” Father Paul replied, as he shut the mini door and locked it.

“Now, I strongly believe someone must have been hiding under your desk, and just when I passed out, they bailed through the opening. It makes sense, doesn’t it?”

“That’s interesting. The only thing is that not everyone knows there’s an opening here.” He jumped down, picked up the stool, and walked out of the storage room. “Someone must have been watching me, or sneaking into my office in my absence. That’s the only explanation.”

“Watch your language, young lady. We are in the house of the Lord.” Father Paul sounded fierce.

“No, Father Paul. I meant your hands.” I pointed to his hands. “Is that blood?”

Father Paul looked quickly at what he thought was rat pee, then realizing what it really was, he flung the stool and ran to his landline, hitting the redial button immediately.

“Detective Slaughter?” Father Paul said, voice shaky, hands trembling. “You need to come over to my office with your team right away...because there’s blood in my storage room.”

Want to know what was really in the storage room? Then download a free 40% sample HERE and purchase a full copy from major ebook distributors (iBookstore, B&N, Kobo, Amazon, etc.)

Thanks a lot.
Literarily Yours,
CMO.