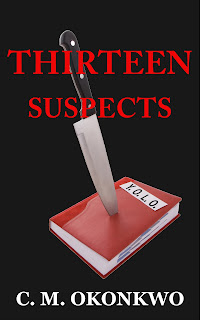 I hope you all are doing well, and I hope you enjoyed the #BookBuffet offered during the "Read an Ebook Week!" I'm still trying to digest all the books I got :)

I want to be the first to announce that from today until the end of May 2014, my new erotic/suspense book Thirteen Suspects will be available at a preorder price of 2.99USD (thanks to the readers that suggested this).

PLEASE SHARE THE WORD!!!
Thirteen Suspects is a fictional Erotic/Suspense novel about a young Nigerian student who was found dead in his London city studio. Two detectives, Christina King and Richard Gailor, interrogated everyone that had contact with him on the night he was killed. All of them were cleared, except thirteen particular suspects, each with intriguing stories and secret motives.

The preorder promo is available on:

Apple iTunes (modify the country code to get the exact price in your local currency): Click HERE.

If you have already purchased a copy at the original price, you can email the receipt to me (contact information is on the home page) and I'll give you a free copy of my first book The XIth Hour.

I have also agreed to release one chapter of "Thirteen Suspects" on my blog next week. Readers have to vote on what chapter they want to be released from chapters four to eight:
Chapter four: Elsie the Wanderer
Chapter five: Black boy
Chapter six: Three is a crowd
Chapter seven: Miss Jones
Chapter eight: Best is best

You can either vote by commenting on this post, via Twitter @CMO2904 or via my email address. The chapter with the most votes by the end of next week will be released.

Have a nice weekend.
Literarily Yours,
CMO.
Posted by C. M. Okonkwo at 4:46 PM