Book Review: A Conspiracy of Ravens 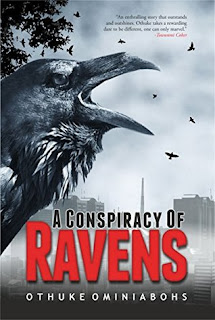 In the Niger Delta creeks of Southern Nigeria, nine expatriates are being held hostage by militants fighting for control over the resources from their land. At the same time, a series of seemingly unconnected events rock the country.

Alex Randa, an agent of the Department of State Services, a celebrated hostage negotiator with a compelling record of successes is tasked by the president to secure the release of the hostages; and to also uncover the sponsors behind the militants. With nothing to go on but the phrase 'Operation Raven', her instincts, and three unlikely allies, Alex quickly learns that nothing is what it seems. Together, they must race against time to save not just the hostages but a nation on the brink of a bloody Civil War.

***
“A Conspiracy of Ravens” is a novel in the Political Thriller/Suspense genre by Nigerian author Othuke Ominiabohs.

It's very difficult to review this book without spoilers, but I'll try. It took me about 5 days to read it, and it's simply because I didn't want it to be over too soon.

It’s a political thriller book like I love it, action-packed, a thick plot with several levels, and a lot of characters to keep up with.

The beginning starts off well with an interesting prelude, taking us back to 1982 to a well thought out assassination that ends with the assassin being the target by an unknown albino. Similar to a case of "the hunter becomes the hunted." But did the assassin die? Maybe, maybe not. I was really impressed at the beauty of an assassination plot in 1982.

The story then shoots forward 30 years to modern time 2012, with a touch of Nigeria’s Boko Haram issue, and the introduction of a mysterious, dark being interested in the chaos. Then it comes to 2014, with all the issues Nigeria is facing that could tear the country down - Niger Delta militants, kidnappings, missing Chibok girls, threat of secession and Biafra, missing government funds, a possible civil war, and so on.

Finally, in an epilogue we go five years into the future, which I already expect to happen as we remember things and people from the past, especially the fate of an unborn child.

The story has an unusual ending, with a promise of a sequel focusing now on a female main character... this reminds me so much of a book I read a few years back titled “The Galadima Conspiracy,” which is equally a political thriller, with a similar thick plot.

With a nice plot, beautiful dialogue, well-researched setting, and some interesting characters, it feels like you are a spectator in the book, moving from location to location to see what everyone is up to.

The only things that threatened the otherwise action-packed, fast pace were the descriptions and all the stories behind each character, especially as there were a lot of characters. Although the descriptions give you a feel and touch of the story, sometimes they were unnecessary and ate into the flow of the book. For instance, in the middle of an action or an assassination, the assassin stops to think about his past that adds no meaning to the story; or we suddenly get a description of the rug, curtain, or armchair in his target’s house. It slows down the pace for me.

In every book I always have a favourite line or setting, and mine was about a small boy running away from armed Niger Delta militants at night. He runs into the arms of an ex-US ranger tasked to rescue one of the hostages, sights his night-vision goggles, and faints - that part got me laughing so hard.

It was an interesting and entertaining read.