Short Story Preview: Not A Word 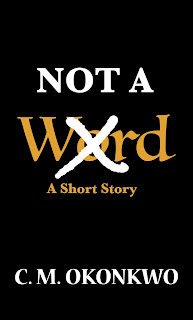 I hope you all are doing great, and welcome to the beautiful month of March!

Since I have a lot of interesting short stories I have written over the years, some of which have been accumulating dust on my laptop, I decided to share some more while waiting for the 'something big' that's coming.

Unfortunately, this one isn't free, like the others, but you can get it for as low as 50 Naira from Okadabooks and 99 cents on other international platforms... I promise you it'll be worth it.

Short Story description:
Dare suspects his wife of cheating and seeks counsel from his friends for a solution. He comes up with a plan to catch her red-handed, but what he discovers is way more than he expected.

The bar was filled with young professionals, some still in their corporate wears and jacket, and most of the women in skimpy clothing. It was Friday night, and while some people went to work in their casual outfits, some didn’t.

Dare was meeting up with some of his friends at a bar, but he didn’t want to go home first to change into something more casual. He wasn’t in the mood to drive home and he also didn’t want to see Anita. He hoped she would be asleep when he got home late at night. He simply sent her a text message, saying that he was going to be with his friends at the bar and that she shouldn’t expect him back home anytime soon.

She had replied to him, not acknowledging his text, but saying that she would never cheat on him, but he deleted the message after reading it and tucked the phone in his pocket. He ordered a drink and sat at a table waiting for his friends to arrive when the first showed up.

“Oh boy, how are you?” It was Rotimi. He gave Dare a rugged handshake that ended in a brotherly hug, then added, “You didn’t go home first?”

Dare shook his head. “No need.”

“Okay, let me grab a drink,” Rotimi said, and went to the bar.

Just as Rotimi was returning, Pius showed up too. He greeted both of them, then looked briefly at Dare. “You didn’t go home first?”

“Don’t mind the bastard,” Rotimi replied, making himself and Pius laugh. “That’s the same thing I asked him.”

“I wanted to, but I had a long week and if I had entered the house, I wouldn’t have been able to come out again,” Dare lied.

“Good thing you didn’t, because I would have killed you if we all came here and didn’t see you, especially as you set up this Friday night hangout,” Pius said.

“That’s why I didn’t.” Dare smiled, a smile that betrayed sadness to the observant eyes.

“Well, you had better remove the jacket,” Rotimi said. “Or everyone would ask you the same question as they come in.”

They all laughed, as Pius got up to go and get a drink at the bar. Dare removed his jacket, but it didn’t stop the other guys, Ikenna, Chiji, and Fola from asking why he hadn’t gone home to change.

Pius returned with bottles of drinks and glasses for the table. He never really liked buying a glass of drink and standing up to go and refill at intervals, especially as he drank his drinks in gulps and hardly got drunk. He was always the last man standing... or sitting.

“Hmm, you should be a barman or at least a bar owner,” Fola said, as Pius dropped some of the bottles on the table. A barman followed him, carrying a tray with some more bottles and glasses on it.

“Your father should be a barman,” Pius joked, and everyone laughed.

As they all sat and drank, they talked about work, about ladies, although three out of the six were married, about football, about Nigeria as a whole. All of them contributed, except Dare, who kept mute and kept looking into his glass as he drank and refilled.

“Dare, you have been quiet,” Chiji remarked. “You brought us here oh, better talk.”

“Looks like he wants to compete with Pius,” Fola said, and everyone laughed.

“Or rather, looks like he is trying to get drunk so that he wouldn’t look at his wife tonight,” Rotimi added, as he laughed. Others muffled a laugh or said “hmm,” while Dare wore a straight face. He could have killed Rotimi on the spot if possible, just for saying that.

“What’s up, man?” Ikenna asked, gulping down his own drink.

Dare wanted to tell them what was really going on, but because of what Rotimi had said, he suddenly didn’t feel like telling anymore. He was embarrassed. He and his friends had always discussed wife, girlfriend or side-chick problems, and he had always been on the commenters’ side, and never on the hot seat.

He didn’t know how he would be perceived for his revelation. His friends always admired his marriage and the relationship he had with his wife, although it seemed as if it was jealousy and as if they hoped that one day it would crash, and he would end up like them — cheating, lying, and treating their partners awfully. Even Rotimi talked about his wonderful marriage to Anita and their rock-solid relationship so often, sounding more of envy than admiration, that Dare was afraid to say things were not going well for him at home.

“Dare, talk to us now,” Pius pressed further. “We are your guys.”

“Abeg, it’s woman problem,” Rotimi said. “His ever so precious and faithful wife must have done something.”

Dare looked at Rotimi, angered. “Why would she have done anything?”

“Well, because she is a woman and—”

“What type of stupid talk is that? Not all women are the same.”

“The same way not all men are the same,” Rotimi said. “That’s just the way it—”

“Okay, so what is your point?” Chiji interrupted, trying to avoid an impending argument.

“Dare isn’t like the rest of us, so I know that the problem isn’t from him,” Rotimi replied.

“I think... I said, ‘think’ oh. I think Anita is cheating on me,” Dare eventually said, and they all kept quiet for a few seconds.

Then Rotimi yelled, “I knew it.”

“Men, my guy, what are you going to do about it?” Pius asked.

Dare looked confused. “I thought the plan was that you all will help me out and tell me what to do?”

“The thing is, we are normally the problems and we cause more problems for our partners with our problems,” Pius, notorious for constantly cheating on his wife, said. “Our partners have never been the problem, so we don’t know how to tackle this one oh.”

“But how do you know she is cheating?” Fola asked.

“I think... I don’t know,” Dare replied. “I see socks under the bed sometimes, singlet in my wardrobe that she will say belongs to me when I know it’s not mine. Then there are used guest towels in the bathroom and my cologne keeps going down. Recently, one of my favourite tee shirts was gone.”

“There’s nothing to think about there,” Rotimi blurted. “It’s obvious. She isn’t as nice and faithful, and all of those other things you kept saying about her.”

“With all the signs present?” Ikenna asked.

“She still maintains her innocence.”

“Guy, wake up,” Chiji added. “So what are you going to do until she is proven guilty? Will you just come to the bar every day to drink and get home after she has slept?”

“You surely can’t catch her in the act that way, because you would be out all night when all the action happens.” Fola made a provocative gesture when he said ‘the actions happens’ and everyone laughed, except Dare.

“Unless you look for a way to watch her all the time,” Rotimi suggested.

Dare looked at Rotimi again, then stood up. “I should leave now.”

“Guy, hold on nau, we were just joking,” Pius said. “We really don’t know how to help you here. Maybe you should really catch her in the act first, but you won’t be able to tolerate her until then... if you eventually catch her.”

“I won’t be able to live in the same house if I suspected my wife was cheating,” Fola said.

“And you are actually the worst cheat in this country,” Ikenna pointed out, and they all laughed.

Fola gulped his drink, then said, “Well, men and women are different.”

“Please don’t go there. Men and women are the same, if they cheat, then they are both cheats, end of story.” Ikenna also gulped down his drink.

“So what should I do?” Dare brought the focus back to himself.

“Ditch the good-for-nothing cheating bitch,” Rotimi said. “If she cheats on a faithful and loving man, then she doesn’t deserve you.”

Everyone looked at Rotimi, then Dare walked out of the bar. He wasn’t angry at Rotimi’s stupid suggestion. Rotimi had always been annoying, even when he joked, and he was a hater under his skin. Rotimi had actually given him an idea, so he had to think more about it.

Want to know what happened next and what Dare discovered? Get a copy from Okadabooks, Smashwords, Amazon, or any other major ebook distributor.