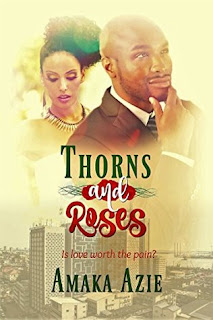 I like how the characters are introduced, especially Chuma, as Mr. Frown-Face; you don’t have to be the smartest person in the world to know that he never smiles; and I liked how Ifeoma watched him from the shadows, making me long for the moment they finally meet.
The story goes back and forth in time, from present-day Lagos to a few months/years before in the village, in Anambra, which is okay because it’s not your typical flashback of only narration but of a "happening now" style story with dialogue. It makes the flashback easy to read and would have been too bulky otherwise. I actually looked forward to the backstory.

Ifeoma is protective of her three younger sisters and unhappy because their father thinks less of them since they are not sons, and despises their mother for failing the supposed one and only duty of a woman, to produce sons. Ifeoma’s dad dishes her young sister out to an old man to marry and Ifeoma steps in, proposes to return part of the bride price, and offers herself in exchange for her sister. It was brave but sad, especially as her father only saw it as an opportunity to still marry off the young sister to someone else. I was hoping there would be some sort of miracle to prevent Ifeoma from marrying the alcoholic potbellied old man, and from three days to the wedding to one day, I waited until the husband-to-be came to the house unannounced wanting to taste his price before the wedding. After Ifeoma managed to escape, she made up her mind that her life and that of her sisters weren’t in the village. That's how they came to be in Lagos, and it was a nice sequence of events.

Ifeoma meets Chuma in her canteen she has loaned money to set up, and after some back and forth, they become friendly and get to know each other. When Chuma asked about her parents and she said they were dead, I couldn’t wait for the next flashback to know what had happened to them. Ifeoma and Chuma play around for some time clearly in love and to an extent in lust with each other but they take their time to manifest the love and lust, and when they do, it’s hot. The romance and intimacy was hot, almost comparing to, if not better than Adaora and Ikenna in Melodies Of Love.

Chuma finally becomes protective of Ifeoma and helps her get out of the loan she borrowed from an ill-mannered man who forces himself on women looking for a loan or when they can’t pay it back. It was sad to know that it had happened to Ifeoma, and a relief when Chuma helped her out. Although it wasn’t in his place to, and having the man evict her from her canteen, making her beg on her knees and cry was painful, but it was the best for her eventually.

Their relationship reminded me of Anastasia Steele and Christian Grey in Fifty Shades of Grey... young, fine, rich guy with fine taste and a helicopter, and a cute, timid girl with fewer means but doesn’t want him to spend money on her. In this book, it’s good-looking, rich guy with a luxurious boat, and a cute, timid girl with fewer means who doesn’t want to take anything from him. In fact, their first intimate scene was almost like Ana and Christian, and I was surprised Ifeoma wanted to be in charge and on top, and wondered what she knew about intimacy when we’re made to believe that she’s never been intimate or had any boyfriends before Chuma. And sometimes the expressions she used didn’t sound like she had grown up in the village and had recently moved to Lagos where she was hustling... it seemed like she was unsure if to remain the village girl or a semi-posh girl.

So their love blossoms, and although Chuma’s controlling and obsessive nature almost ruins their relationship, they soon get married and live happily ever after... for some time. I so expected something to go wrong, because that’s the only way things would get better. There won’t be a truly happy ending if there’s no rocky middle. And boy was it a tough one.

The second part of the book shoots to five years later characterized by grieving for the loss of a toddler son, the shadows of another woman, the threat of a divorce, and an alcoholic potbellied secret from the past, all of these rocking the young marriage. We advance in the story but each time a little piece of the past is brought back, either through flashbacks or dreams, to explain how their story went from love to war... but in the end, love won.

I also like that for Ifeoma and her sisters to forget about the emotional pain their father put them through, they went back to their village to see their parents, who surprisingly, are still alive. Although their father is ill and can’t remember them, they got their closure and the outcome made Chuma and Ifeoma come back together, even stronger than they were when they got married.

My best part was at the beginning of the book when Chuma was trying to break up with Tonia, one of his flings who wanted more. He offered her money so that she would leave peacefully and she got offended. After it was clear that he didn’t love her and wasn’t going to commit to her, she gave up, and giving him an acid look, she said, “Okay, send the money to my account. Nothing less than two hundred thousand or I’ll mess you up.” I thought that was hilarious since I expected her to just leave.