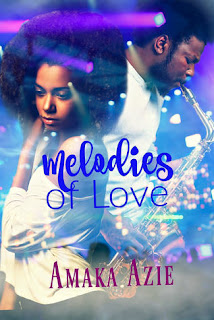 After her teenage romance with now popular music star, Aristar, ended in a disastrous heartbreak twelve years ago, Adaora finds herself thrust back into his life when her financial firm is employed to organise Aristar’s finances. She has a fortress built around her heart and finds it hard to trust. Can she forget the bitter past and allow love to find her once again, or is the past enough to shatter her dreams of happily ever after forever? Ikenna, one of Nigeria’s highest-paid musicians, is finally at the top of his game. He has fame, more money than he could ever dream of, and the life he has always wanted. He seems to have it all, but something is missing. In spite of all the women who persistently threw themselves at him, the one person he can't seem to forget is Adaora. He has manipulated events to bring her back into his life, but will he be able to convince her to give them another chance, or will the bitterness of the past destroy their chance at happiness?

***
“Melodies of Love” is a novel in the romance genre by Nigerian author Amaka Azie.

Interesting story and plot, but there was a little something missing for me.

The main characters Adaora and Ikenna reunite after 12 long years of being apart, and they are both still crazy about each other. Adaora was 16 and had barely turned 17 when she first dated and was jilted by Ikenna. There were a lot and long narrated episodes of flashbacks, but I didn’t feel any romance between the characters at the time that would make them want each other so bad after 12 years of being apart.

Another issue for me was the narration. It made the chapters too bulky, just reading and reading, and no dialogue. I’m a lover of dialogue, especially between friends, families, or lovers, but there was too little dialogue for me to put permanent voices and ‘character’ to the characters. Some parts were in desperate need to be spoken as opposed to narrated, especially during a meeting where Adaora is giving feedback on the analysis of Ikenna’s finances to the team.

There's a line that goes: “She got a lot of questions, which she answered correctly.” That’s too easy, I would have loved to know the questions and how she answered them correctly because reading is learning. I would have loved to learn a few things about financial analysis from Adaora. Then there’s Ikenna’s personal assistant who supposedly asked Adaora "annoying questions" all through because she was clearly jealous of Adaora, but there again, we don’t know what questions and we can’t feel the intensity of the jealousy because there are no words spoken or feelings expressed.

When Adaora and Ikenna get back together, all the romantic action starts, and that’s where the book gets me because it’s a relatable romance. The chemistry is apparent, and they explore everything together as if they are meeting for the first time. There’s now a lot of dialogue, so I finally get to identify their characters. In fact, I got so carried away in their romance that I forgot about the financial investigation Adaora was running on Ikenna’s account to know who was stealing his money.

When Ayo, the guy who was helping Adaora with the investigation showed up, it brought me back to reality. I sort of guessed who was stealing Ikenna’s money, so that part didn’t come as a surprise to me. However, it was not handled nicely... author should have made it a bit more dramatic and natural, but it seemed rushed.

Adaora and Ikenna's love and relationship was so nice, that I feared something might go wrong and boy was I right. But, as love always wins, in the end, love won and in a beautiful way. I wouldn't want to spoil the fantastic ending.

My best line is when Ikenna and Ada get intimate for the first time. They are having breakfast in the morning, and Ada is running late to work. Ikenna says “Give me your clothes to iron while you take your bath. You know, to save time.” That’s typical of some Nigerian men, and I loved it. Celebrity or not, he gets to iron her clothes. Ada of course was moved. She said he was the best.

It was a short, but enjoyable read.