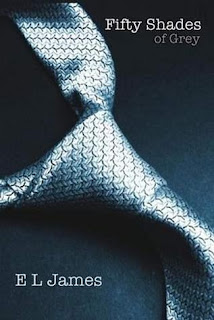 When literature student Anastasia Steele goes to interview young entrepreneur Christian Grey, she encounters a man who is beautiful, brilliant, and intimidating. The unworldly, innocent Ana is startled to realize she wants this man and, despite his enigmatic reserve, finds she is desperate to get close to him. Unable to resist Ana’s quiet beauty, wit, and independent spirit, Grey admits he wants her, too—but on his own terms.

Everything about the story was beautiful, and the erotica, romance, humor and thrill were nicely interwoven in equal doses. I liked that the main characters were young, so they could get away with a lot of things, from behavior, to dialogue, to childishness, and to mischief, which would have been weird for older characters.

The characters were believable, although most of the stories seemed more like a fairy tale than reality, like the whole helicopter scenes and the perfectness of each character in their own way... everything just seemed to be perfect, even flaws were painted beautifully... tears and crying sounded so nice and perfect you would want to cry yourself. I read one part of the book almost ten times and a scene in it gave me an idea for the realistic fiction story I was currently working on. I would never have imagined getting an idea from an erotica book for a realistic fiction... but I'm convinced that ideas can come from anywhere as long as we keep reading.

To me, "Fifty Shades of Grey" is not your average 100% erotica book with no story, only sex, as I initially thought. It's a nice story with an erotic flavour, which I didn't want to end... so I was sad to see an ending. I also thought the ending was fine, with... (I don't want to give spoilers), because I believe that all good things can either remain as they are or come to an end... whichever is acceptable to me as long as there is a reason for it. I thought the book ended well and wondered why there was a second, and a third volume. I can't think of anything more to add to the story, but I have added them to my to-read list.

I recommend this book to anyone who just wants a good, nice, funny read, or anyone who needs some kind of writing inspiration. You never know in what genre you can get the click you are looking for.