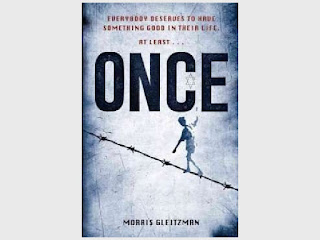 Once is the story of a young Jewish boy who is determined to escape the orphanage he lives in to save his Jewish parents from the Nazis in the occupied Poland of the Second World War.

Everybody deserves to have something good in their life. At least Once.

Once I escaped from an orphanage to find Mum and Dad.

Once I saved a girl called Zelda from a burning house.

Once I made a Nazi with a toothache laugh.

My name is Felix. This is my story.

“Once” is a historical fiction novel by Australian author Morris Gleitzman.

I read this book with my nephew to help him develop a reading culture, and I’m glad I did.

Although it was a bitter-sweet story, it was fantastically delivered from the point of view of a young boy, Felix. We don’t know how old he is, but it would have satisfied me to know.

Felix is a Jewish kid living in an orphanage in Poland, an arrangement his parents have made to keep him safe from the Nazis. After more than 3 years there, Felix escapes in search of his parents. He manages to locate his house and his parents’ bookshop, but his parents are nowhere to be found. In fact, another family has taken over their home and bookshop, and they threaten to hand him over to the Nazis. He escapes and is advised by an old man to leave immediately. He should never have returned. He is now on the run, for reasons unknown to him, still with the goal of finding his parents.


He meets a 6-year-old girl, Zelda, whose parents are killed and who he saves from her burning house, and together they are on the run. They go through ups and downs together, through mental torture and through the thought that they are going to die when they are thrown into a train headed for a death camp. They escape from the train with another kid, who doesn’t survive, but then, there’s still no freedom; they are on the run again from Nazi soldiers looking to kill them.

What I didn’t really like was Felix’s “cluelessness” to what was going on in Poland - War, Nazis, and the killings. The Nazis were shooting at and killing people, but hearing the gunshots at a distance, Felix would think people are hunting rabbits. When he got to a lake that was blood red, he thought people had killed rabbits in the lake. I wasn’t too pleased with his ignorance all through the book. Sometimes, I wanted to believe that he was just in denial and that he used his stories and imagination to remain in that denial, but I’m not sure it was the case. It felt as if he chose when to be clueless and when to be aware.

He read a lot, had a vivid imagination, and was smart about everything else but the obvious. It was clearly the author’s intention to portray him in that manner, especially as other kids about his age knew what was going on, and that the Nazis had two missions - hunt and kill the Jews. Eventually, he began to come to reality and understand that the Nazis were not angry with the Jews and killing them because of Jewish books, but simply because they were Jews. I felt like Zelda almost the whole time, as she constantly asked Felix, “Don’t you know anything?”

My favorite part of the book was when he saved Zelda from the burning house. She had passed out and her parents had been killed, but she wasn’t aware because Felix had carried her away after seeing Nazi cars in a distance. When Zelda came to, she began asking about her parents and crying. Felix managed to calm her down and the first thing she said was, “Your hat smells.”

That part cracked me up because I could perceive the pungent smell from the pages of the book. Felix had peed in the hat earlier to keep his head from blistering. After I read that part, I said, “Eww, that’s going to stink.” Zelda had definitely read my mind.

There were a lot of funny moments, sad moments, thrilling moments when I had to hold my breath, scary moments, and moments of relief.

I loved that each chapter of the book began with the word “Once,” which is definitely something I would do, and the reason why I looked up the author after reading the book. The book ended with a nice note from him, some discussion questions, which I answered with my nephew, and a preview of the sequel of the book titled “Then.” In it, I got to find out Felix’s age (10), and that things get worse for him and Zelda. I can’t wait to read it.

Amazing work from the author.