I made the shortlist - Quramo Writers' Prize 2018 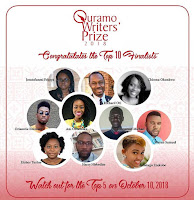 I hope you all are doing well, because I am 😀.

Just a few moments after sharing information about my baby's birthday and the availability of his book across all e-book distribution platforms (see HERE), I got some amazing news.

So I entered the 2018 Quramo Writers' Prize - QWP  earlier this year, and sincerely, I didn't think my story was going to get shortlisted.

Why?
Because it was a tough novella to write. I even mentioned it HERE in June.

I usually write crime, suspense, and mystery stories, so I went to my eldest sister for an idea for a new story with a Nigerian theme. I didn't have QWP in mind then. My sister is worse than I am. She loves mainly romance, and all her stories are nothing close to Nigeria. So when she gave me the idea for a new story, I instantly loved it, because there was an unexpected twist at the end. All I had to do was Nigerialise it.

However, I struggled to get the plot together since the story was meant to run for sixteen to seventeen years. I also struggled to get a title and a catchphrase for the ending. I actually had to sleep over it, and just like magic, it all came to me the next morning. I sent two of my sisters a message saying that I had found the perfect title: "All That Glitters," which isn't short for the common saying "all that glitters isn't gold." When I told them the catchphrase I had also created, they said I was truly a writer with imagination. I blushed.

So when I got to find out about the QWP (someone had mentioned it on her Instagram page, saying that she was almost done with her story), it was already two weeks to the deadline, but I decided to partake in it. They wanted a novella, not more than 20,000 words. I thought fast, then settled for "All That Glitters."

How was I going to write a seventeen-year story in less than 20,000 words in under two weeks?

It took me about two days to sort out the plot and outline the chapters to capture the number of years needed to tell the story. That part was eventually easy and straightforward, but the delivery was tough, it gave me a headache. I got stuck at some point, so I had to merge two chapters to move forward. By the time I was done with the story, I only had enough time to do one full edit before the deadline. So I was sure I had submitted an entry packed with editing errors. After I was done with the whole process and after I had submitted the story, I took a one-week break to rest my brain before writing the next book.

While I wasn't expecting to be shortlisted, I'm glad that my hard work and sleepless night weren't in vain.

Congratulations to all ten of us, and I look forward to the top 5 finalists to be announced on October 10... don't hold your breath.

Email ThisBlogThis!Share to TwitterShare to FacebookShare to Pinterest
Labels: Contests