Book Review: You Used To Love Me 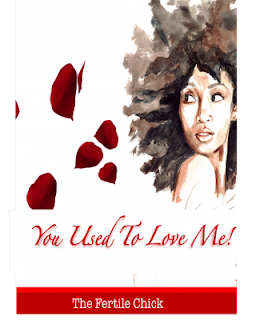 After a tumultuous marriage, where she suffered emotional, physical and psychological abuse, comes to a violent end, Cheta is determined to begin her life anew. Alas, she is haunted by her past...and it threatens to destroy any chance of happiness in her future...
***

“You Used To Love Me” is a novel by author The Fertile Chick.

A nice and interesting story, although I was afraid it would be another "love triangle" at some point because it read like one of the author’s other books titled “The Love Triangle.”

I must admit that after reading her first book, which I didn’t really enjoy, I was worried about this one, since I had already bought it, and it surprised me because this one was much better and nicer.

What got me with the book was what appeared to be a murder, in the beginning, a body, a knife, and blood. Murder always comes with suspense, and that’s my best genre.
The narration style was nice and different, similar to Chimamanda Adichie’s style in her short story titled “You in America,” but the author couldn’t or didn’t want to maintain it, I’m not sure which. Sometimes the main character, Cheta was narrating the story to her husband, Tersur, who used to love her, and in between, the narration would be addressed to the readers. For instance, when Cheta was trying to arrange a date for her former neighbour Tonye, it was a nice addition but had nothing to do with Tersur or the “you used to love me” storyline. One of the dates, Nana, a very classy lady, was intimidating, so Tonye wasn’t interested, then Cheta says “But Nana no gree oh.” I was wondering who she was addressing at that point. Tersur, her now ex-husband who used to love her? I’m sure he couldn’t care less who Tonye was dating or was interested in.

I like the fact that both Cheta and Tersur came from large families. I also liked the role each family member that was mentioned played as well, and how sometimes they came together to solve a problem. And just when I was getting deeper into the story, there was the famous love triangle, between Cheta, her ex-husband Tersur and his brother Atoo, only that both men have wives, so it was more of a triple love triangle... I have nothing against love triangles, I wasn’t just expecting it.

Just like the author's other book, random bits and pieces are thrown into the story for convenience sake. I’ve been following Cheta's life for about 10 years, and only when she goes to Port Harcourt to “win back her man” (Tonye) who has never actually been her man, that we learn that she had visited Port Harcourt in the past for Tonye’s sister's wedding (who we are just knowing exists), and his father’s 10 years remembrance (who we've never even heard of in the book). Tonye becomes Cheta's best friend and they know each other for almost as long as the book goes, but we only get to know she attended those events with him when she needs to get around Port Harcourt, to justify the fact that she knows her way around. In my opinion, the whole Port Harcourt bit was unrealistic and could have been removed.

And as usual, there were editing errors and some inconsistencies 😞, but they can be easily taken care of by another round of editing. I sort of managed to ignore the errors because the story got nicer with all the little bits of suspense and action, from Cheta stalking one of her husband’s lovers, to finding out that he had a love child, the suspense was really nice. I also felt sad after the passing of her new neighbour, who seemed to be a nice friend. Then Cheta’s struggle to have a child, the disappointment that followed, her heartbreak, divorce, and loss of her mother-in-law was just one emotional roller coaster, but good thing that joy always comes in the morning.

The twists and turns were nice but started to become a lot, making the book too long, unnecessarily long. I believe some parts of the story could have been removed, just to maintain the initial narration style and flow, and it wouldn’t have upset the plot. In all, I enjoyed the story and finished the book in a few days.

I always have a favorite part of a book and this one was when Tonye took his girlfriend Juliet and Cheta to his friend's wedding. Juliet gets offended and leaves because someone had given a toast hoping that Tonye marries Cheta. Tonye runs after Juliet, and so does Cheta. Juliet is arguing with Tonye and realises that Cheta is there. She then glares at Cheta, and asks, "Why are you even here? Why are you even a part of this conversation? Why are you a constant third wheel in this relationship? Why can't you just leave us alone? Cheta doesn't respond, as she doesn't know what to say, but Tonye does, and he says "Cheta is my best friend, baby! She has been for years." Cheta's narration goes "Juliet's face clouded over. Wrong answer." I laughed hard at that part because I was thinking the same; it was indeed a wrong answer and it definitely had its consequences.