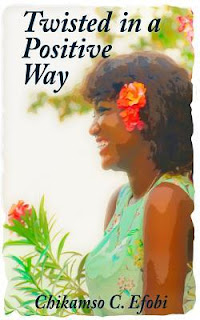 Spanning decades in the heart of Mushin, Lagos Nigeria, this coming-of-age tale of a charming heroine unfolds delicately and is based on the story of a young girl, Adaugo who faces difficult odds. The loss of a loved one and navigating cultural expectations and gender roles are major themes in this personal narrative documenting the growth and learning of a young girl with big dreams. As Adaugo listens to the still small voice within her, her growth from a young girl in boarding school to a precocious brave woman is studded with precious gems of divine insight. Her journey is one that any person, young or old will learn from as it illustrates the beauty and triumph of dreaming big and never giving up.
***

"Twisted in a Positive Way" is a novel in the Literary Fiction and Coming of Age genre by author Chikamso C. Efobi.

First, let me commend the author for taking the bold step of writing and publishing her debut novel. It was a lovely attempt, though a little more could have been done in terms of plotting and linking elements of the story from chapter to chapter so that some significant events in the early days of the main character play a role in her later days.
The beginning of the book was nice, although a bit sad as the main character, Adaugo lost a family member. It was actually touching, and I thought that the essence of that part was that it was going to affect Adaugo or shape her life, however, there was not much mention of the death anymore once Adaugo went to high school.
I was eager to know more about the high school because two of my sisters went to Abuloma, but there's not too much about the school after Adaugo enters and goes to her room. From then on, everything is rushed until the end of the book. Adaugo is growing, but you are not growing with her because before you even try to understand how she’s coping in a new environment, we are transported several years later.
In high school, Adaugo meets a girl, Oluchi on the first day and they become best friends. Towards the end of first term in a 'Nigerian' secondary school, Adaugo is going to use the toilet and overhears other 'JSS1' students casually chatting at 2am. While this might be true in some schools, it was difficult for me to accept because of strict boarding house rules and senior girls staying in the same room as junior girls. The backstabbing characters are quite bold and aren't hiding or whispering, as someone from the corridor can hear them. Oluchi is among the girls casually chatting and says hurtful things about Adaugo.
We don't know how Adaugo deals with it, which would have been an important part of her growth given that it affected her emotionally. She leaves for the first term holiday the next day and while on the plane back home, an imaginary character, 'Herself,' (maybe the subconscious of Adaugo), teaches her the different types of friends in a dream. Adaugo wakes up briefly, and when she goes back to sleep, 'Herself' immediately continues from where she stopped. It didn’t seem real, but then again, it's fiction.
Adaugo finally goes home for the holiday and the next thing you know, it’s 2 years later and that’s the end of Oluchi in the whole book. We don't know if Adaugo ever confronted her or if they settled later. That was unsatisfying for me.

As we are trying to keep up with Adaugo now in JSS3, the story shoots several years again and she is in the university. She meets new friends in the university, and there are a lot of other characters who add nothing to the story; no moral, no lesson; they just come and go, sometimes they are remembered when convenient. Some are just mentioned for the fun of it: Tope the ‘any work’, Monsurat the roommate, Lara the sex buddy... Adaugo is again transported several years, where she starts working at a bank and where there are many more random characters. Again, we do not know how long she spent at the university and what it was like for her. Sometimes I had no sense of time. The time jumps were too much... No telling if the next chapter is the same day, same week, or same year... It just starts.
I enjoyed many relatable instances in the book, but I didn’t really know how to classify this book, because when I got to the end, I didn’t get the main point or the moral of the story. I didn’t know why most of the incidents in the story happened and how it affected the main character as she moved on. Some scenes ended abruptly in the middle of a situation with no answers provided; some conflicts had no origin and no end. Also, there were a lot of characters who seemed to have roles in the story, then suddenly just vanished never to be heard of again.

There were also some minor inconsistencies and stiff dialogues, but nothing to raise an alarm for.

One part that baffled me was Chapter 34. Out of nowhere, the narration is now on a certain Zainab Omisore, who we have never heard of until now. She is the wife of Julius, a rich man who Adaugo had opened a bank account for. In the chapter, Zainab and Julius have just finished having sex... Zainab recalls how she met Julius, then they have sex again and the chapter ends. That’s also the end of Zainab in the whole book. Not sure what significance it had to Adaugo or to the story.

Finally, I know that sometimes titles tell a story or are linked to the story, but I don’t know exactly how Adaugo was twisted, and in a positive way... (Or was the title about her?) She seems pretty normal to me, the author just needed to focus on her more and show us what she was feeling most of the time.