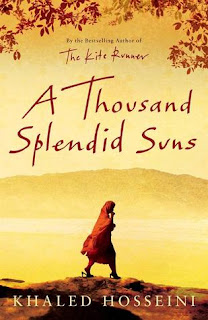 The book, which spans a period of over 40 years, from the 1960s to 2003, focuses on the tumultuous lives and relationship of Mariam and Laila, two Afghan women. Mariam, an illegitimate child, suffers from the stigma surrounding her birth and the abuse she faces throughout her marriage. Laila, born a generation later, is comparatively privileged during her youth until their lives intersect and she is also forced to accept a marriage proposal from Rasheed, Mariam's husband.
***

"A Thousand Splendid Suns" is a novel in the Literary Fiction genre by Afghan-American author Khaled Hosseini. It is his second, following his bestselling 2003 debut, The Kite Runner.

If I could change the title, I would name it A Thousand Splendid "Funs."

I keep saying to and promising myself that I won't give spoilers in my reviews by only commenting on the story, plot, characters, consistency, flow, etc., and not mentioning names and incidents that moved me, but I never stick to that promise.

That being said, I totally enjoyed this book, although the beginning was a bit slow, it was however a way to get readers into the story... which is normal with full-length literary fiction. A book can't be that long with no back story at least. So it was kind of a slow read for me with off-and-on moments.

But then, all the action started in the third part, and that was when I started and couldn't put the book down until I finished it. When the stories and events started to materialise, they were mind-blowing. I smiled, I laughed, I was sad, I was sad again, I frowned, I laughed again, sometimes at scenarios that weren't meant to be funny but the descriptions just got me cracking... I have many of these instances:

-When an Afghan woman is not allowed to go out without a male relative and how one of the characters kept trying to go out and she always got caught and beaten up by the Taliban. It wasn't meant to be funny, but I always found myself laughing.

There was also a part where the two wives were enemies, Mariam after nursing a young Laila to health, her husband decides to marry Laila. Mariam is obviously unhappy, but when she finds out why Laila had accepted the marriage proposal of a married man the age of her father, she understands and they become a team. In an attempt to run away from their husband, I was shocked at the betrayal of a man, Wakil, who agreed to help them but sold them out to the authorities...  In fact, that whole episode got me laughing, but when they got back home, I wasn't laughing anymore. I started to smell what the rock was cooking... Very heartbreaking and touching events followed.

One particular part got me cracking when Rasheed (a character I was growing to like before he turned out to be someone I didn't like) was guarding his home with a loaded gun and his daughter crawled up to him... his reaction was the funniest. I actually stopped to laugh.

The little Zalmai was a very funny boy, with his innocent yet dangerous actions; and Tariq, oh Tariq, a brave young man.

The deaths, torture, beatings, punishments that occurred along the line were just heartbreaking, and at a certain point, Laila seemed to be in a box, trapped, nearing an inevitable end... But when her unexpected guest showed up, I actually jumped for joy, relieved, because she was then saved, eventually at the expense of someone else. It was good to see that there was some good, something to smile about at the end of the sadness that overshadowed the book.

After I closed the last page of the book, I found myself researching Afghanistan; the places, the monuments, and the people mentioned in the book. It was history and entertainment in one bitter-sweet book.