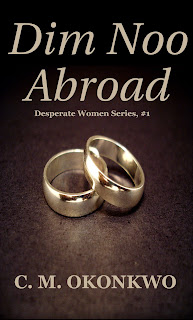 My third novel titled “Dim Noo Abroad,” which literally means “My husband is abroad” in Igbo (Nigerian) language, was born out of a one-sentence reply to a simple question “why?”

I was at a Café close to Paris-Gare de Lyon in 2011 with two friends discussing life, work, and what the future held when one of them announced that she was moving back to Nigeria for good.

“Why?” was the natural response-cum-question to follow, and it did, from both my other friend and myself.

The friend who had thrown the bomb replied, “Because I want to get married, and I don’t want to be like those girls in the east (Eastern Nigeria) who keep saying “Dim noo abroad,” “Dim noo abroad.”
I thought it was funny. I actually started to imagine the girls, all married to men living abroad, who they hardly saw, but proud of it, then I decided to write a story about it. I said that I must write about it. I decided to write about 10 girls, who would do anything to get married to husbands living abroad.

With the help of my other friend, we started to think up characters, their (funny) names, their backstories, scenarios, and dialogue, because I wanted it to be a Play, starting with a scene in a Western Union office where some of the girls would meet up to receive money from their spouses living abroad.

But after about a month, we forgot about the project. Who was I kidding? I didn’t go to university in Nigeria, let alone in the east, so how was I supposed to know what to write about?

Fast forward three years later, I’m having a year off work to focus on writing, something I called a “writing retreat for self,” and I needed a change of environment, for inspiration. I went to stay with my sister in Chicago, and I got all the inspiration I needed, from walking down Lake Park to meeting new people every day, I couldn’t stop writing. I wrote two novels “The XIth Hour” (Psychological Thriller / Suspense), “Thirteen Suspects” (Erotica / Suspense), a novella “Closed Door” (Young adult / Mystery), and a handful of short stories, all in the space of five months. It felt good, I felt good and couldn’t stop.

Then my sister and I had to move briefly to Indiana, where a lot happened and I met totally different characters. Nigerian characters. Some too surprising and unbelievable, that I had to start writing again, and this time I picked up the “Dim Noo Abroad” project and decided to challenge myself. I sent a mail to my friend, who had started the project with me in 2011, and what do you know, she was also in the U.S. I told her I wanted to pick up the “Dim Noo Abroad” project again, but she couldn’t. She was busy, with family and with work, but she was able to dig up the little we had done in 2011 and forward it to me.

It was okay. I was on a writing spree and didn’t really need extra hands. Also, I didn’t need to have schooled or lived in the east to write a story about the east. Since imagination is limitless, all I needed to do was use my imagination, combined with the people I met and interacted with to write the story. And that was how I put -pen to paper- fingers to keyboard and wrote. I wasn’t only guided by my imagination, but also by my emotions, and in three weeks, I completed the book. I was proud of myself.

I sent the manuscript to a lot of people, both friends and family, and also strangers, just in case, for feedback. I got feedback, very beautiful and positive feedback, as the book was loved by all, and that touched the soul.

Everyone related to the book, and they knew at least one character similar to someone they knew in real life. They were even more surprised to find out that it was all fiction because they thought I had interviewed girls from the east to write the book.

Fiction became reality when one of my older cousins read the book and told me that it reminded her of her university days in the east. She had schooled in the east more than 20 years ago and it was the order of the day, even back then… girls wanted husbands living abroad. Some tried and never made it, some made it and it didn’t end well for them, and some others made it even without trying. The most fortunate ones were those who married husbands living abroad and went on to join them there.

My cousin also told me some real-life stories that sounded like fiction, but she reassured me that they were real. She laughed as she remembered the stories because back then she didn’t think it was an issue since everyone was into it, but thinking about it in 2014 and reading about it in a book, it made her realise how silly they all were back then.

I was surprised. I had no clue that I was writing a true story. And everyone who has read the book so far has told me that they still know people looking for husbands living abroad. In fact, the use of the phrase “Dim noo abroad” is becoming more and more frequent. I always want to say “thanks to me” or “thanks to my book,” but it’s actually “thanks to the friend who first used the phrase.”

As I continued to get more stories, I wanted to add them to the book, but I didn’t know where to start from, so I decided to write a sequel and title it “Yankee Based Wives.” This time, the girls are not just looking for husbands living abroad. Abroad is too broad a word for them. They want husbands living in the U.S., and they would do anything in their power to get what they want. The book is already completed and would be released in 2016 in the “Desperate Women” series.

I hope you get your copy and also hope you enjoy it. Please leave me a review after reading whether you enjoyed it... or not, feedback will be highly appreciated.