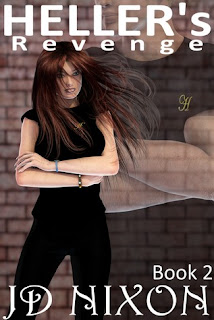 Tilly Chalmers’ sexy boss, Heller, has a talent for making enemies. Not a forgive-and-forget kind of man, he has a few scores to settle - including one with Tilly’s brother. Tilly is kept busy juggling that constant worry with managing three new assignments as a rookie security officer - crowd control at a lingerie parade, babysitting an immature, sex-starved IT billionaire, and an unusual and emotional job with a famous environmental activist. But as usual, Tilly’s assignments don’t go quite to plan. All this, as well as trying to keep her vow not to sleep with her beautiful and enigmatic boss, no matter how much of a temptation he proves.

Heller's Revenge is a full-length "Chick Lit" novel in the general mystery/detective genre. It's the second of seven books in the HELLER series by Australian author JD Nixon.

It took me this long to finish the book because I couldn't go past the first 20% of the book before. I finally did after a while. It's definitely not as good as the first. I was also shocked at how things randomly changed between Heller and Matilda... felt like I missed an episode and that I was reading "Heller's Girlfriend" only that Matilda wasn't Heller's girlfriend, but was always in bed with him, doing things with him but not going all the way, because she had a boyfriend...

Some parts were also ridiculous. I wondered why Niq would call Heller a 'beautiful man' at 8 years old?? Why Matilda would feel like doing every single man she sees. How Matilda wold go from 27 years old to 25 in a matter of chapters (maybe that was a typo). How a doctor (PhD though) can say that Heller is eerily beautiful... almost supernatural. A man would never say that about any other man, unless they were dating. Felt like Matilda was thinking and speaking for everyone. The author sometimes forgets to change the voice/style for each character. They all sound like Matilda sometimes.

I heard other books in the series are better than this one, so maybe one day I'll read them.

You can get a #FREE copy of the first book in the series, which is amazing, here: HELLER. I also wrote a review for it HERE.