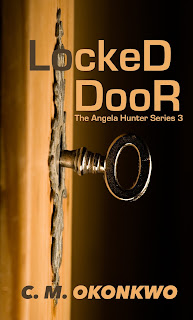 I'm happy to announce, AGAIN, that the third volume in the Angela Hunter series, titled "Locked Door" has just been published. It gets even more mysterious and suspenseful than the last one, "Jammed Door." I can't really get enough of Angela Hunter, so I'm not done with her yet :). You can read my post about Jammed Door HERE.

The detectives believe that someone is out for those involved in the closed-door mystery, so they try to stay ahead of the game. But after another body is found behind a locked door, it changes the whole game entirely.

I have also added a free preview below. Enjoy! Share! Comment! :)
#SpoilerAlert if you haven't read Closed Door and Jammed Door, then you need to stop here.

“If I get what you are saying correctly, Flora Shaw,” Sgt. Black started. “You injected Bill Newman with the insulin that killed him?”

Flora nodded. “Yes. The balding priest asked Jim and I to do it. Said he was going to pay us some money and told us exactly what to do and what to plant in the kid’s bag.”

“Do not listen to anything this crazy woman has to say,” Jim added, sounding furious. “She is crazy.”

“No, you are the crazy one, and the priest too. Both of you are,” Flora barked.

“I’m not going to ask you again to shut up.” Sgt. Black threw Jim a strict look, then turned back to look at Flora. “So what happened?”

“We did everything that was asked of us, to the book, blamed it on the gardeners, who do not exist by the way. The two men were just regular men who had been paid to stand there for eyewitness account. But I am no fool, no one promises me money and gets away with it.”

Jim shook his head. “The love of money brings down any man or woman.”

“No, failing to keep to one’s promise brings down a man or woman,” Flora replied.

“You have no idea what you are doing. You are incriminating yourself for heaven’s sake, you dumb woman,” Jim yelled.

Flora sprang up. “Who are you calling a dumb woman? It’s you who got played.”

Sgt. Black signaled to Detective Pruitt and he escorted Jim Helm out of the meeting room against his will.

“Just keep your mouth shut,” Jim yelled, as he was being dragged out. “Don’t say anything stupid.”

“Get lost,” Flora yelled back.

When the door closed behind Detective Pruitt, Sgt. Black continued. “So, as you were saying...”

“Jim came to me, saying that there was a job with a lot of pay. All we had to do was inject a young boy with some substance, he would pass out and eventually die, then we would get rid of the body. After the coast was clear, we would get paid for the job. It was as easy as that.”

“I never got paid for that. I asked Jim and he said he hadn’t been paid either, but I don’t believe him. It’s either he was played or he is playing me, but I’m done with the games.”

“Who else?” Flora show replied, opening both hands. “It was his priest friend, Father Paul. I don’t know why that man is still a priest. He should be in prison...”

Want to know what led to this confession? Then download a free 40% sample HERE and purchase a full copy from major ebook distributors (iBookstore, B&N, Kobo, Amazon, etc.)