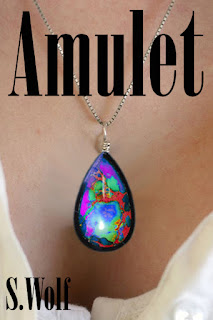 Adults only due to graphic sexual situations.
***

Amulet is a novel in the Erotica/Couples Erotica genre, by author S. Wolf.

The book cover doesn't give a clue what to expect, but given that I never judge a book by its cover, I dug into this one. And I must admit, I was surprised at how the mystery and suspense were beautifully interwoven with the erotica, all in almost equal doses.

(Semi-Spoiler) A lover of mystery and suspense myself, I knew the minute Jason opened the door at the hotel room that he wasn't alone in there. Yup, I saw that one coming. I would have asked for the same thing as Sam did.

I also liked the ending. My heart skipped at first when I saw "Hey Becky," then I started hoping it was a dream before I was finally relieved.

You can get a #FREE copy of the book HERE.