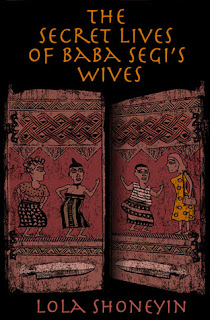 To the dismay of her ambitious mother, Bolanle marries into a polygamous family, where she is the fourth wife of a rich, rotund patriarch, Baba Segi. She is a graduate and therefore a great prize, but even graduates must produce children and her husband's persistent bellyache is a sign that things are not as they should be. Bolanle is too educated for the 'white garment conmen' Baba Segi would usually go to for fertility advice, so he takes her to hospital to discover the cause of her barrenness. Weaving the voices of Baba Segi and his four competing wives into a portrait of a clamorous household of twelve, Lola Shoneyin evokes an extraordinary Nigerian family in splashes of vibrant colour.

This book had an amazing plot/story, if only the delivery/storytelling was as good. It did have a lot of nice, funny, and memorable moments where I laughed out loud and had to go back to reread, but there were a few things wrong with it as well.

First, I couldn't really relate to the characters, especially three of Baba Segi's wives, who were illiterates, so their use of big words and expressions was totally unbelievable. I think this was done intentionally by the author, but it took away the purpose for me. I would have loved to hear a proper dialogue of an illiterate, not the voice and sometimes rich descriptive vocabulary of the author.

Secondly, the constant jumping from POV, with no transition, made it confusing and inconsistent. I had to deduce each time who was narrating by the use of keywords or names, and in the process miss the gist of the chapter. The flow/pace was also lulled for me when a character is narrating, then in between, addresses the reader before going back to the narration.

Thirdly, I found most of the flashbacks unnecessary as they didn't really add to the story. Baba Segi's driver got a chapter/narration, surprisingly, and more than 50% of the story was about his older brother, who died, and had no business in the plot at all. Then the driver, also an illiterate, uses big words. He also describes the vagina as a slippery, slimy snail, quite unpleasant.

Finally, the revelation of the unexpected and shocking secret was poorly done, and Baba Segi's reaction to it was boring. I expected more from such a secret. The ending wasn't as exciting as I would have hoped.

My best part in the book, however, was where Baba Segi learnt some disturbing news about his fourth wife. He raised his hand, seeming like he was going to hit her, but he immediately asked for the toilet to throw up. Hilarious. I did like Baba Segi's character and description as a tough, somewhat overprotective husband, but he throws up and messes himself each time he gets a piece of unsettling news.