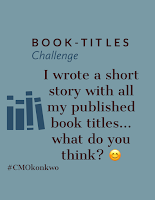 As we end this month, let me drop a short story.

Ever since I published Like Never Before, people around me have been using it in sentences... especially the ANA (Association of Nigerian Authors) chairman, who just inspired me to write a short story with all my titles.


"ALL THAT GLITTERS isn't gold," Mama had told me over and over again, but I was too stupid to listen. Perhaps it was pride or just stubbornness, but either way, I didn't listen. I left home and didn't look back, as I heard the LOCKED DOOR behind me.

FINDING LOVE isn't easy, that's why you try to keep it. It's like a BLOCKED DOOR with many obstacles, but you try to manoeuvre them and make love work because THE OTHER FACE of it drives you to do anything. Your actions are unknown, just like what lies behind a CLOSED DOOR.

I chased after Peter, a man I met online, desperately longing to be his wife, and in THE XITH HOUR, just as I was about to give up, he proposed to me. I expected our future to be LIKE NEVER BEFORE, but he kept me at home. At first, it was a business trip for two days. Two days became two weeks, then two months. I got tired of telling lies, so when people asked, I was compelled to tell the truth that DIM NOO ABROAD, because my husband was indeed abroad, for good. In fact, he was actually married to someone else in the US because he and his friends had always wanted YANKEE BASED WIVES.

I came home one evening and met a JAMMED DOOR. I struggled with it until a strange man walked up to me. After he opened the door, he told me that he was a lawyer... the lawyer. He gave me TWENTY-ONE DAYS to vacate the premises, because my fiancé, if I can still call him that, and his wife were visiting soon.

Time came too fast, and to both Peter and ZIORA'S SURPRISE, I was still there when they arrived. Peter rained insults on me, but I said NOT A WORD and still did not leave until he threw me out of the compound, embarrassing me. Just across the street, there was a playground, so I went to sit on THE WHISTLING SWING that creaked each time someone used it, and there, I thought about what to do. I came up with a plan, stood up, and left.

I returned to the flat, and as I raised my hand to knock, a scenario flashed in front of me. I had planned to kill them both and bury them, then live happily ever after in the flat. But WHEN IT'S MURDER, the police would get involved. They will get THIRTEEN SUSPECTS, which is everyone living in the compound, and interrogate us. And when they find me guilty, I would be thrown into a BLACK BOX with a SHARED DOOR to other inmates, and have a terrible life forever. I shook that scenario out of my mind, then turned around and went away.

A few hours later, I got to a house in another compound and knocked. A familiar voice called out, asking who it was, and I replied, "MAMA, IT'S ME!"

Mama immediately opened the door and welcomed me back home. She forgave me and was sure that I had learnt my lesson. After we caught up on everything we had missed in the time that I was away, she encouraged me to start doing something meaningful with my life. That was when she handed me a guide titled "HOW TO WRITE A BOOK IN UNDER TWO WEEKS" and my amazing journey to a new and fulfilling life began.

What do you think?