Five days to go - All That Glitters 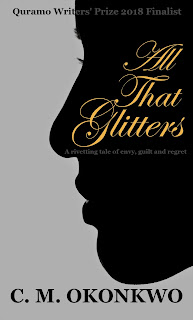 Excited? I am. It's five days to the release of my novella titled "All That Glitters," and I can't wait to share it with you all.

For those of you who also can't wait and want to get a taste of what is to come, the book is now available for pre-order on major ebook distribution platforms like Amazon and Smashwords, and also on Okadabooks.

As a special offer, I've added a few chapters of my unpublished novel titled "Like Never Before." It was written earlier this year before "When It's Murder" and "All That Glitters." It's my second attempt at a love story, and one that doesn't involve the police or any detectives, although we briefly meet a private eye 😀.

See the cover and description below: 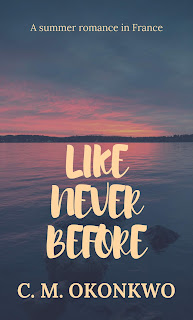 Chiny, Nigerian, car sales executive, single; David, British, actor, in an on and off relationship, meet in the beautiful city of Nice, in the South of France after an unusual conversation.

They instantly become friends, and after taking an exotic private boat tour of the Mediterranean Sea, they get intimate and have a brief affair. Their romance comes to an end with the summer leaving Chiny distraught and David satisfied.

More than a month later, after they go their separate ways, Chiny contacts David and delivers some interesting news that promises to bring them together again, but threatens to change their lives forever.

What do you think? Would you love to read it? Just like the title, it's a story like never before, and I hope it makes you fall in love... with France of course 😊.

I've always wanted to write about France, especially Paris and the South of France; and what better way to write it than in a love story?

I initially had no plans of releasing this book anytime soon because I decided to release one book a year from 2019, starting with "When It's Murder." But since I'm eager to share my stories with the world, I don't think I can torture myself by waiting for a whole year before releasing anything.

So, to commemorate #France, my first love, and #BastilleDay, I'll be releasing this book on #14July2019 #StayTuned #Coming2019