Book Review: The Story of Anna P, as Told by Herself 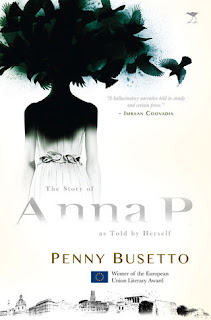 Anna P lives on an island off the coast of Italy but can no longer remember how she got there. She came from South Africa but has almost no memory of the place or people there. The only person she has a kind of personal relationship with is a sex worker whom she pays by the hour.

It is only when she begins to connect emotionally with a young boy that she finds some value in herself, some place which she will not allow to be abused, and her life gradually changes.

This meticulously crafted, atmospheric debut novel asks a number of difficult questions about the nature of memory: who are we if we lose our memories? What does it mean to have no identity? And if we have no identity, can we still make ethical choices?
***

"The Story of Anna P, as Told by Herself" is a novel in the Literary Fiction genre by South African author Penny Busetto.

This is longest review I've written so far, and I'm afraid it might be longer than the book itself, which is just about 153 pages.

I’m not really sure how to begin with this book, but it was disturbing in so many ways, and somewhat sad. It tells the story of a woman who is living and working on an Island in Italy, but has no memory of how she got there. It’s laced with mystery and mysterious occurrences, but nothing supernatural.

Although there are similarities between the author and her character, like the age they both moved to Italy, how long they lived and worked in the country, and the many cities they went to, I read that the book is based on the story of “Anna O” which is a pseudonym of a patient Bertha Pappenheim, diagonised with hysteria, and her treatment marking the beginning of psychoanalysis.

The book is divided into three parts, and each part reflects on the present, past, and then the future of Anna P. She's an English teacher on an island off the coast of Italy. Although she feels empty and her memories are in bits and pieces, she still has a normal life until she gets a letter from the Italian police station, and that’s when things start to change for her.

She’s asked questions about the places she has been to and the people she met upon arrival in the country, but she has no memory of them. As the story goes along, she meets random men, and the encounters end mysteriously with blood and death. But then, when we are transported into the past, we realise that she really did meet those people, and that what we are reading in the present are flash memories of her past.

And also, the investigator who is trying to get to the bottom of the story wants to get into her pants, and she whacks him in the head minutes into it and leaves him for dead.

When we go back to her past, we learn that she had a terrible childhood, with abuse from two family members that left her mute for many years until she is sent to Italy, where things get worse for her. Since she is mute and often passive, it appears she is taken advantage of by most, if not all, the men she meets, because it’s difficult to conclude if she is a willing partner in all the sexual encounters. (Most of them end up dead, or does she just wish they were dead or imagined them dead? Not sure.)

She gets a boyfriend, while she is mute, and also meets another man who is in love with her and convinces her to leave her boyfriend. She gets connected with the new lover and starts talking again. But when she tells the lover about her past, he calls her “mad,” and that’s when she flees to the Island to live in isolation. She then befriends a female sex worker and her young male student who has forced himself into her life to be cared for.

When she gets to a dead end, with the police after her and the islanders watching her closely, she runs off with the boy, and we enter into the third part of the story... the future. The future is how the story ends, so you’ll have to read that to find out.

In summary, it’s a story about a woman who suffers abuse as a child, and how she copes with it. The story was confusing most times, but I believe it was the intention of the author to put the reader in the head of the narrator to feel what she feels, see what she sees, and have a better understanding of how people in a similar situation cope.

The language and style of the story is simple, but the author has added a lot of dialogue in Italian language with no translation, which makes it difficult to follow sometimes. Some of the sentences were similar to French, so I was able to translate and understand them. The others, not really, and I didn’t want to stop my flow of reading to go online to translate the sentences.

I thought of reading the book a second time with the understanding I got after the first read and the new mindset I had, but then I decided to let my memory fill in the blanks for me.

If you have madness and have difficulties understanding it, then you can read this book. If you know someone that has madness, and you want to understand them, then you can also read the book :).

You can also watch a video of my short review HERE.