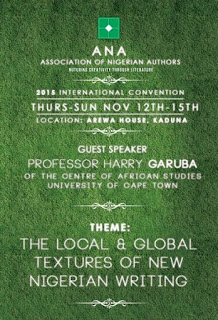 The Association of Nigerian Authors has released official posters after postponing its upcoming 2015 International Convention by two weeks. The convention will now hold from 12th - 15th November at Arewa House in Kaduna (Nigeria).

I told you that November will be packed with a lot of creative and literary events... :)

The shift was done for two reasons: to accommodate the Lagos International Poetry Festival that started on the 28th of October 2015 to end on the 1st of November 2015, and for the PAWA -Pan African Writers’ Association's International Conference celebrating Chinua Achebe on the International African Writers’ Day at Accra, Ghana. The PAWA Conference will hold from the 5th to the 8th of November, 2015. However, the shift coincides with the Lagos Book and Art Festival, holding from the 13th to 15th November 2015 in Lagos.


Both literary events are important and unique in their own way, so it might be a tough decision to make for publishers, authors and book lovers. But my take is that Kaduna, and the North in general, might scare people because of its current security challenges. I'll have to attend one of both... only time will tell which :). 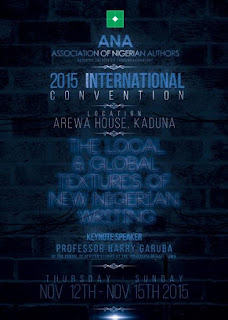 Here's another official poster from ANA.

What do you think? Too spooky? Too blurry?

It think it looks cool with the different shades of blue... my favorite colour, but too blurry. I get the message and the theme of the posters though, but a reduced blur would have been much better. 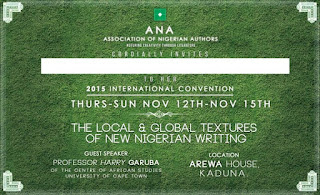 Here's an invitation to the convention. You can download it and take it along with you.