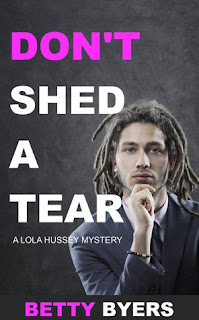 When Lola Hussey, newly fledged Private Investigator, was on a night out at a ragga party in London she spotted someone who looked like her long lost brother, Marley, on the dance floor.

As she pushed through the crowd to reach him, two shots rang out and there was alarm as screams replaced the boom of the music. Party goers immediately dropped to the floor in panic.

Lola's second case had begun - and this one was much closer to home.

Going undercover once again, this time in the shallow world of the music industry Lola soon encounters a world of revenge and violence leading to tragic consequences.
***

"Don't Shed A Tear" is a novel in the Women Sleuths, Mystery and Detective genre, by author Betty Byers, and the second in the series: Lola Hussey Mysteries. Read my review for the first book in the series, "Don't Call Me Baby" HERE.

It took me almost a year to finish this book, and I decided to finish it to clear out my "currently reading" shelf.

While I REALLY enjoyed the first book in the series, this one wasn't as good. 85%-90% of the book was spent beating around the bush and the final 10% had all the suspense, mystery and case to be solved. All the main characters surfaced at the end, from Marley, who really didn't have a role, to Romeo (whose role I didn't think was significant. He came into the story at the end, we never met him, but he killed someone and just went to prison). There are other supposedly important characters to the case, who I can't remember.

I also found it hard to feel sad for Marley since I didn't really know much of him. His character and story were rushed in the last 10% of the book. Emm's reaction was narrated and rushed: she was sad, then she forgave Lola and her mum (in one sentence only, when there were a lot of parts that could have been removed for the main story to be told).