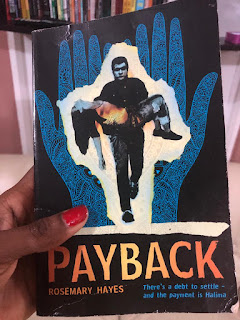 Book description:
Like other young Muslim girls of 18, Halima has moved with her family to London and her horizons are beginning to expand. Then, just as she is about to start university, she discovers her father’s plan: to marry her to the son of a distant relation in Pakistan who once did him a favour. Halima is to be the repayment of the debt. And it's payback time...
***

I got this book at a fundraising bazaar organized by an erstwhile chairman of ANA Lagos, and I’m glad I picked this one amongst so many choices. I was intrigued by the title and the tagline, initially thinking it was a crime/thriller novel, but the description said otherwise.
A young Pakistani girl, Halima is promised to a man in her village many years back for helping her father out of a difficult situation, an arrangement she knows nothing about, until years later after she’s moved to England with her sister and mother to join her father and brothers and finds a Pakistani guy she likes.

Brought up in a setting where matchmaking and fixed marriages are a norm, Halima doesn’t contest it, though she begins to have some doubts after she gets exposure in the western world. However, after her sister is married off to a suitable man who she agreed to, Halima has some hope. She believes she can accept or refuse a man proposed by her father, then she meets a cousin of her sister’s husband and suggests him as a husband. No one pays her any attention until her sister finally lets her in on the full story. Her father promised her to a man and must keep to his word.
Halima understands the importance of family and honour, not just to her family but to the family of the man she’s promised to. And given her exposure to the western world and their different ways of thinking, she is caught between making her own choices and respecting her family. Her immediate older brother, the model child of the family had quit school and run away, and in return, he got cut off from the family and was disowned. Halima doesn’t want this but has no choice.
With the help of two trusted women, she makes a choice.
I felt sorry for her most of the time, caught between an overbearing father and a submissive mother. As a Pakistani girl, she’s not supposed to have a voice. Her good education means nothing if her chosen husband says so. I liked how she got a connection with her brother-in-law’s cousin, but who she was advised to cut all ties with since she was promised to another, a debt of honour.
I smiled when she spoke to her runaway brother and he mentioned that he had seen her friend. She asked “Which friend...” when her brother mentioned the name, I was ecstatic, and so was Halima. The rest they say is history, but the action that happened thereafter literally kept me on my feet until I finished to book. Halima finds out that breaking such a promise has dangerous life-threatening consequences. She gets in a lot of trouble because of her decision, but the bravery of her friends sees her through.
It was a truly enjoyable book and I learnt a little about Pakistani culture in the process. The book swung between various POV, which I don’t really fancy, but this one was done in the right doses and at the right time. I also loved how the book cover looked weird but made absolute sense as the reading journey came to an end.
The book felt so real, so it gave me some satisfaction to know that it was based on the real-life experiences of a young, brave Muslim woman.
I always have a favourite line in every book. Though there were way too many funny parts, my best was when Halima overheard her runaway brother (before he ran away) and her father yelling at each other. The boy, Imran was the model son, but his father kept putting him under pressure to study more, even more than his older brother. They argued until Imran said to his controlling dad, “Get stuffed. You’re doing my head in, going on at me all the time. What if I don’t want to be a bloody lawyer or accountant, eh?” You can only imagine how that scenario eventually turned out.
5 STARS