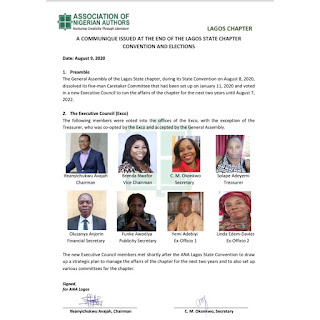 Preamble
The General Assembly of the Lagos State chapter, during its State Convention on August 8, 2020, dissolved its five-man Caretaker Committee that had been set up on January 11, 2020 and voted in a new Executive Council to run the affairs of the chapter for the next two years until August 7, 2022.

The Executive Council
The following members were voted into the offices of the Exco, with the exception of the Treasurer, who was co-opted by the Exco and accepted by the General Assembly.

The new Executive Council members met shortly after the ANA Lagos State Convention to draw up a strategic plan to manage the affairs of the chapter for the next two years and to also set up various committees for the chapter.