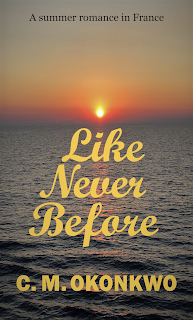 As I count down to the release of my upcoming romance novel, I'll be sharing chapters of the book every other week.

Here's the second chapter, and I hope you enjoy it:

Chiny didn’t sleep all through the flight. She alternated her time between looking out of the window and watching movies, and when the pilot announced that they were about to land, she regretted not having used the time to learn some French. The only word she knew was ‘bonjour,’ and she was glad that they were landing in the morning, so she could get to use it.


She smiled all through until the plane touched down in Charles de Gaulle Airport exactly six hours and twenty-five minutes after taking off. She had kept track of the time so that she would know if the flight time and what was written on her ticket were the same. They were the same all right. She had left Lagos by 11:55 p.m. and landed at 6:20 a.m. She smiled as she exited the aircraft and smiled as she got to the immigration check.

The air smelled different, fresh, and not suffocating. It was summer, but the weather was still cool, cooler than Lagos. She passed through immigration without hassle, happy that they understood a little English. It only took her a few minutes to get her passport stamped, then she headed for the main airport to look for how to connect to her next flight. She had a one-hour stopover in Paris, after which she was going to board another flight to Nice.

When she got into the main airport, the strong smell of pastry and coffee greeted her. She had heard a lot about French bread, which fascinated her, but she was not too pleased about their love for coffee, because she hated the bitter taste of coffee. She squeezed through the multitude of people in the airport, who were looking for one thing or the other and going from one place to another until she found somewhere to sit. From her position, she could see the flight schedule displayed on a screen and would know exactly where and when to board when it was time.

While waiting, she decided to call her mother to let her know that she had landed safely in France. When she switched on her phone, she received a ton of notifications from her phone operator welcoming her to France and giving her roaming options. She ignored them and dialled her mother’s number. Her mother picked up immediately.

“Chiny, did you miss your flight?”

“Oh, I thought you would call with a French number.”

“I will get a phone line once I settle down.”

“Okay. Please let us have the number as soon as you get it. Two weeks is a long time not to hear from you.”

“I’ll call you with the new number as soon as I get it.”

“All right. Take care, my dear,” her mother said, before hanging up.

One hour went by quite fast and before Chiny knew it, she was on the local flight en route to Nice. This time, she didn’t look out of the window; she had already seen it all.

The flight took an hour and thirty minutes, and by 8:50 a.m., Chiny had arrived in Nice and was heading to her hotel. She had booked a room in a small local hotel, which was the most affordable, or rather cheapest option she had seen. She didn’t mind that it was cheap, as she planned on staying for two weeks and she needed to use the bulk of her money for shopping.

Relating with the taxi driver had been a tough task, so they used sign language most of the time, coupled with writing, to communicate before she got to her hotel. The hotel receptionist, on the other hand, was bilingual, so there were no issues. Chiny took her box up to the second floor, then entered the room and sank into the bed. The room was just there, nothing out of the ordinary. It looked like an old brick house, with wooden floor, but it still felt cosy, though a bit too warm. The weather in Paris was definitely cooler and better than the one in Nice.

Chiny lay down and started to plan her activities for the weekend. She was going to look for a club to go to later in the night, then go to the beach the next day. She planned to have as much fun as possible in Nice before going back to Lagos. First, she needed to get a SIM card, and speaking of SIM card, she realised that she hadn’t yet turned on her phone since she landed in Nice. She pulled the phone out of her handbag and switched it on.

A few text messages came in. The bulk was from her phone operator again and she wondered why they were sending more notifications. One of the messages was from Nneka. Chiny opened it immediately.

“Frog. Why is your phone switched off? Haven’t you gotten to Nice yet? Sorry I missed your call. I was still sleeping. Call me back.”

Chiny laughed and called Nneka back. As usual, Nneka picked up within the first ring.

“French frog, how are you?” Nneka asked. Chiny laughed again.

“I’m in Nice baby, so I’m the happiest person in the world right now.”

“Bush girl. It’s pronounced as niece, not naice. Please don’t go and disgrace me there oh.”

“You’re not serious.” Chiny had always thought it was pronounced as naice, because of the spelling. There had been announcements at the airport, certainly, but everything was in French, so she didn’t know if she had heard the correct pronunciation or not. She took note of the correction, then added, “Anyway, I’ll give you a call later, once I get a SIM card.”

“No problem,” Nneka replied, then hung up.

Chiny had changed into a tee-shirt and shorts, with flip-flops. She wore dark sunglasses as she walked down the street. With the help of the hotel receptionist, she had tracked down the bus station and taken a bus to Centre Ville, which was the city centre. She located a phone shop and went to buy a SIM card. Communication was a bit difficult, but she was eventually able to procure a pay-as-you-go SIM card and buy some call credit and data on it.

Once that was done, she tracked down the office of Lignes D’Azur, which was the public transport company. The hotel receptionist had advised her to buy a bus pass since she was staying for two weeks. It would definitely cost her less to use the pass, as opposed to buying a ticket each time she got on a bus.

When she was done with all the essentials, she walked around the city centre, taking in the beautiful streets, the shops and the half-clothed people who walked about, some eating food, some eating ice cream and others talking and laughing. Chiny felt instant hunger at the sight of food and stopped by a shop to buy spicy kebab and a soda. She didn’t have to speak French for that. All she did was point at the food she wanted, and it was prepared for her to go. She had never eaten on the street, but this day felt different. She was in a city that didn’t care about anything or anyone, so she enjoyed her food as she took the bus back to her hotel.

Chiny had enjoyed her long nap and had just woken up to see several missed calls on her phone. It was almost 9 p.m., but she wasn’t sure how long she had slept for. Most of the missed calls were from her mother and the rest from Nneka. She immediately changed the SIM card and gave them a call-back. She called her mother first to give her the new number and put her mind at rest, then called Nneka next.

“Where have you been?” Nneka asked, as soon as she picked up. She had picked up within one ring again.

“Are you glued to your phone or what?” Chiny replied. “The only time you don’t answer within the first ring is when you are sleeping. Even in the bathroom, you answer immediately. You need help.”

“Is that what I asked you?”

Chiny laughed. “I toured the city centre, but I slept off as soon as I got back. I’m not sure what time though.”

“Oh, okay. So what do you have planned, or are you going to be boring and go back to sleep?”

“What?” Nneka wasn’t sure she had heard properly. “You? Go clubbing?”

“What do you mean by that? I’m in France for heaven’s sake, and I plan to do things I never do on a good day.”

“Hmm. Don’t do what I wouldn’t do oh, because I don’t trust those French boys. It’s only romance and kiss they know.”

“I don’t know what you wouldn’t do, and besides, I’m only going to have some fun. Drink a little and dance a lot.”

“If you say so,” Nneka replied. “So do you know where you are going to?”

“The hotel receptionist gave me the names of a few clubs, but I’ll be going to the one she said is the most popular. She said it’s called Lay Boujuah or something like that.”

“Whatever! French isn’t my first language. I’m going there though, in a short dress.”

“Are you only going to drink and dance, or going for the dudes too?”

“I’m going to have fun, and as they say, it takes two to tango. So I don’t mind the tango.”

“Frog.” Nneka laughed. “What time are you going?”

“Maybe in an hour or two, but I’ll get ready soon.”

“Sounds nice. Have fun for two and make sure you take a lot of photos.”

“Will do. I’ll speak to you later or tomorrow. Ciao!”

“Which one is ciao again? Bye jor. Frog.” Nneka hung up.

Chiny laughed aloud to herself. She then put her phone down and started getting ready for the night.

Did you enjoy it? Please share it with people you know might enjoy it, and check back in two weeks for the next chapter.

Have a lovely weekend!