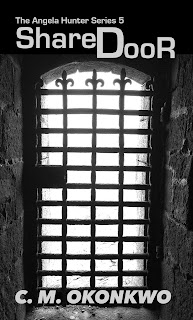 This is it... the much awaited final part of the Angela Hunter series and answer to the five-year long mystery. The fifth and final volume titled "Shared Door" has just been published. It's bigger and better, juicier and funnier than "Blocked Door." You can read my post about Blocked Door HERE.

After the double hit at the prison, the police finally apprehend those responsible for the crimes, and during a series of interrogations and confessions, they discover who is pulling the strings... someone they least expected. Now they must dig deeper to get to the bottom of the mystery in time to prevent the last two targets from getting killed.

I have also added a free preview below. Enjoy! Share! Comment! :)
#SpoilerAlert if you haven't read all four volumes in the series, then you MUST stop here!!!

Dad sat in a chair like a criminal, handcuffed. He hadn’t been moved to the interrogation room yet, but I guessed that Sgt. Black didn’t want to take any chances and have Dad run away. While the three of us sat there waiting, Sgt. Black got out her phone and made a call. I kind of figured that it was the same person she had called earlier to ask about the janitor.

“How are we doing with the janitor?” she spoke into her phone, then paused. “What? In just one day? Okay, fine. No need to bring them here, just scan and send them to the number I am going to text to you right now.”

She hung up, then spent a few seconds on her phone, probably searching for the number, copying, pasting and sending it. She put her head down briefly, as if she was thinking, then looked up at Dad with a disgusted expression. Dad looked directly at her without blinking, then she looked away and immediately pressed something on her phone.

She put the phone to her ear, and said, “Kevin. You’ll be receiving a series of photos now. I want you to transfer them directly to Slaughter and Pruitt. And once you get confirmation from me, run a check on the picture I pick.” She hung up, then looked at the two detectives. “Kevin is sending about 27 photos to both of you right now. I need you to show them to the killers so that they can identify who gave them a hand in prison.”

“27 janitors?” Detective Slaughter raised an eyebrow. “In just one day?”

Sgt. Black shrugged and nodded her head at the same time. “I guess they are sending me all service personnel that got into the prison on Saturday until today. And believe it or not, they are using us to do their job, because we need to investigate just the janitor, but they need to investigate everyone who was there. And they know that if we see a red flag, we will raise an alarm.”

“So when are you guys going to tackle the main issue?”

Everyone turned to who had spoken... Louis French.

Louis French started, “I knew from the start that the Hunter family was behind this, which is logical, but you kept running around trying to solve a case that didn’t exist. In fact—”

“Someone, please, get him out of here,” Sgt. Black interrupted. “I think he has overstayed his welcome.”

Detective Pruitt smiled as he went to lead Louis French out by the arm.

“At least I know that with Mr. and Mrs. Killers, and their apprentices in the station today, I won’t be getting killed. I would probably just hang around until the damned janitor is found.”

Louis French was close to the door, then he turned back and looked at Samuel. “Alexandra is next on the list. It’s not too late for your parents to stop.” He was pushed out and Detective Pruitt slammed the door behind him.

“So,” Sgt. Black said to the detectives. “You can go to the suspects now. Once they identify the janitor let me know.”

“And him?” Detective Slaughter pointed at Dad.

“Don’t worry, I’ll handle him,” Sgt. Black replied, then looked at Samuel and I. “I’ll handle them.”

Want to know who is really behind the mystery? Then download a free 40% sample HERE and purchase a full copy from major ebook distributors (iBookstore, B&N, Kobo, Amazon, etc.)