Book Review: What Will People Say? 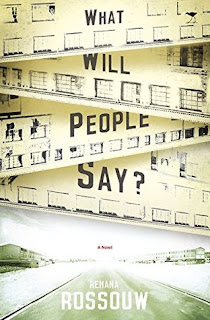 Hanover Park. The heart of the Cape Flats. It is 1986. Michael Jackson and Brenda Fassie rule every hi-fi. Princess Di and George Michael hairstyles are all the rage. There are plans to commemorate the tenth anniversary of the 1976 student uprising.

Neville and Magda Fourie live in Magnolia Court with their three children. They are trying to ‘raise them decent’ in a township festering with gang wars and barricaded with burning tyres. Suzette, the eldest, is beautiful and determined to escape her family’s poverty. Nicky, the sensitive middle child, has ambitions to use her intellect as a way out. Anthony, the only son, attracted by power and wealth, is lured away from his family by a gangster.

Which members of the Fourie family will thrive, which ones will not survive?
***

"What Will People Say" is a novel in the Literary Fiction genre by South African author Rehana Rossouw.

I enjoyed reading the book. When I got it, I sighed because of the size, but when I got into it, I took it down in a day... and a busy day, in which I had a lot to do. It’s a bitter-sweet book and that’s the reason why I couldn’t put it down.

The book is set in the mid-1980s in Cape Flat, an area facing political difficulties, and the story centres on the members of a family, the Fourie family and its personal struggles.

The parents Neville and Magda seemed to be a happy couple but start arguing a lot. Things changed because of the new church Madga has joined that forbids a lot of things. She wants her husband to be more active, but he isn't getting any of that. In fact they had a funny argument where she asked "What are you: a man or a mouse?" and he answers by saying "I must be a man if I don't give into everything a woman wants. Don’t you think so?"

The couple have three children from hell.

The first is Suzette, 18yr old, typical teenager that wants more from life than curfews. She's bored with school, bored of home and wants to be a model, so that can make money. She likes boys and likes partying, and would lie with church activities to go out. She's good looking and finally gets a job at the expense of her studies... She drops out of school only 4 months to her final exams... Her parents don't know until two months after the exams when her report comes home in an envelope... Guess what happens.

The second child is Nicolette "Nikky" the intelligent and brilliant one, but always gets into trouble for her siblings... It's always her fault simply because she doesn't report what she sees, hears or knows. She has a hard time keeping her friends, because everything she does and doesn't do backfires. Something terrible happens to her best friend and she has to suffer for it.

Anthony is the last child and only son... 13yr old and a good kid sometimes until he gets friendly with gangsters and his life turns around. His father warns him not to ever hang out with gangsters, but Anthony sees a peaceful place with them and it's all good until they want to make him a part of the family. Anthony doesn't know what to do, but he has no option... If he doesn't go, they'll come for him. He eventually gets initiated and his life never remains the same.

In summary, the parents are trying to raise kids in a decent way but in an indecent environment, and at the end of the book, you'll get to know what members of the family made it, as in succeed, and unfortunately, what members didn't make it, as in live. Some stayed strong, while others crumbled.

The mother always worried about what people would say, and eventually people had a lot to say.

The problem the book has is the language and the slangs... I don't mean foul language, I mean local language, totally not understandable, except to locals. Sometimes I was lost especially in dialogues... A whole full conversation would be like jargons to me. Along the line, I started to understand some words and slangs because they were constantly used, but some, I never got to understand.

In fact the first thing I did after I read the first few pages was to turn to the last page for a glossary... Shocked when I didn't see any. Anyway to each writer his/her style, but I hope it won't cause people to drop the book before thy get to the interesting parts.

Another problem is that the author didn’t take much advantage of the setting, which is meant to be real and which would have added more element to the story. Once you are done reading, you’ll smile or cry, then move on to what’s next. I’ve read some realistic fiction books that got me researching some places and monuments and historical facts, but all those were missed in this book. The story was nice, but in a whole it was like a moving train with no destination. A family’s struggle in a somewhat real community and the only thing I know about the community is the name and two leading gangs.

In all, it was a nice read.

You can also watch a video of my short review HERE.