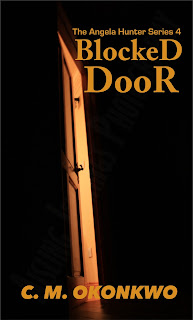 This year has already started with a bang, as the fourth volume in the Angela Hunter series, titled "Blocked Door" has just been published. It's much more mysterious and suspenseful than "Locked Door." It only gets better. You can read my post about Locked Door HERE.

The police have barely started to watch a list of suspects and targets when another body is found behind a blocked door. It is now certain that someone is indeed after everyone involved in the Closed Door mystery. The detectives get caught up in another race to find who is behind the mystery and stop whoever it is.

I have also added a free preview below. Enjoy! Share! Comment! :)
#SpoilerAlert if you haven't read the first three volumes in the series, then you need to stop here!!!

The T.V. booted and the cassette they put in began to play. It showed Vittoria Ammirati slouched on a chair, indifferent, bored, an expression that could not really be placed. She looked amused, as if happy to see the detectives, although she didn’t know why.

“To what do I owe this visit?” Vittoria Ammirati asked. “Still hung on the Agnes Hunter case?”

“No, that case has been closed. I’m sure you already know that, if not you won’t be sitting here,” Detective Slaughter replied.

“Then why the camera?” Vittoria nodded toward the camera positioned on a corner above the door, and looked into it for a split second.

Instinctively both Detectives Slaughter and Pruitt turned around to look at the camera, then looked back at her. They didn’t say anything.

“I’m no fool. I have never seen a red dot on that camera since I got here... until now. You know there’s not that much to do in prison than to observe.”

“You are right. We are here in regards to the Agnes Hunter case. We are still hung on it, but not by choice.” Detective Slaughter changed the topic entirely, ignoring the camera comment, and Vittoria didn’t seem to mind judging by her own response.

“What about it?” Vittoria asked.

“There’s been a series of crimes that have followed after that and I think someone is out for revenge.”

Vittoria’s countenance changed. She adjusted herself on her seat and started looking around, suspiciously, as if the ‘someone’ was suddenly in the room with them, then she looked at the camera again. “What do you mean? You think I might not be safe here?”

Detective Slaughter looked at Detective Pruitt briefly, then turned back to look at Vittoria. “Your son was found dead, and—”

“Shut the hell up,” Vittoria interrupted, then got up. “This is some kind of trick and it isn’t going to work. You hear me?”

“Shut up. I spoke to Luca yesterday afternoon, and he was fine.”

“That was yesterday afternoon. He was found dead in the evening, and we have been trying to find his killers. We believe it was payback for Agnes Hunter’s death.”

“I’ll fucking kill her mother when I get out of here. I should have looked at that picture from the bloody P.I. and known exactly who to take down.” Vittoria burst into tears, and cried for the next three minutes, ignoring the detectives as they asked her questions and also tried to console her so that they could wrap up the visit and leave. When she had stopped crying for a bit, she looked back and forth at the detectives. “Do you have the Hunter woman in custody now? I’m paying my debt for killing her child and she has to pay hers too. Bowen is also to blame.”

“Yes. I’ll kill them both even if it’s the last thing I do in this life. That Hunter cheat might not have had a direct hand in it. All she has to do is plant the idea in Bowen’s head and he’ll kill the world for her. That has always been his strength and weakness. He’d do whatever.”

There was silence, a very brief one, which was broken by Vittoria.

“So you have come to give me news from hell, do I still have to sit here and look at your faces?”