Book Review: No Time For Goodbye 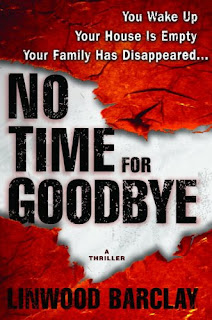 Fourteen-year-old Cynthia Bigge woke one morning to discover that her entire family, mother, father, brother had vanished. No note, no trace, no return. Ever. Now, twenty-five years later, she'll learn the devastating truth

Sometimes better not to know. . .

Cynthia is happily married with a young daughter, a new family. But the story of her old family isn't over. A strange car in the neighborhood, untraceable phone calls, ominous gifts, someone has returned to her hometown to finish what was started twenty-five years ago. And no one's innocence is guaranteed, not even her own. By the time Cynthia discovers her killer's shocking identity, it will again be too late . . . even for goodbye.
***

"No Time For Goodbye" is a novel in the Thriller/Suspense genre by author Linwood Barclay.

In all, an interesting read, filled with suspense.

What really attracted me to the book was the caption: "Gone without a trace. Until now..."

The story started off well (the prelude), but when the POV changed from the main character to her husband, twenty-five years later, it got very slow. The whole beginning was slow, and with the style of narration, the book seemed more like a Dick Lit (my term for the male version of Chick Lit :)) than a thriller book.

I expected more action and less talking, description, and dialogue between father and daughter - mother and daughter, that had no impact on the story most of the time. And some of the dialogues in general didn't seem natural. But moving to the second half of the book, things started to move fast, interesting and exciting, but way too fast, because the end seemed rushed.

Although I laughed a lot at some instances, I was sad when some people were killed, but when I found out who the killer(s) was(were) in some cases, I wasn't shocked or moved. Their reasons for murder wasn't plausible and left me saying "yeah, right." Towards the end, I could guess what was going to happen, because it was a bit obvious. As someone who specialises (and is still training to be the queen of Twists & Turns) it takes a lot to surprise me in similar genres. The author chose the easy way out to end the story, rather than to look for a reason that would leave people shocked and talking about the book even after days of reading it.

It was also a fast read, and I don't regret reading it.