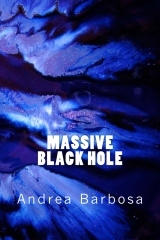 At 18, Cibele, a student from Rio de Janeiro, dreams of a life in New York and moves to the big Apple as an au pair girl, where she meets the precocious Amy, a young scholar whose goal in life is to study sciences and astrophysics. While visiting the MET, Cibele is impressed by a particular work of art depicting hell, in the style of Hieronymus Bosch. When Amy introduces her to astronomy, she is consumed by fear of black holes. Lost and confused with what to do with her life, she meets ambitious Agatha from Texas, who came to New York to succeed as a fashion model. While trying to survive and achieve their goals, the 3 young women question the meaning of life, death and the existence of hell, and their friendship ultimately turns into a maze of betrayal, jealousy and selfishness.
Massive Black Hole is a surrealist literary fiction novel that explores moral issues concerning suicide, abortion, friendship, betrayal, life's purpose and the existence of hell through the lives of the protagonists.

˃˃˃ Because hell is real.

Embark on this spiraling journey through Rio de Janeiro, Texas and New York discovering the ambitions of 3 young women trying to find the meaning of life. Through a series of events that prompt them to play with each other's destiny, they will face their ultimate challenge: is hell real?

Overall "Massive Black Hole" was enjoyable, and it had a very nice plot.

The first few pages were a bit slow, especially the traffic jams, office scene with the Agatha-Janice-Bob scenario, then Cibele and Amy, but once we went back memory lane, everything went smoothly.

I liked how the book ended as well, but a little bit of suspense would have added some spice to it. (The last few chapter titles already gave out an idea of the ending.) However, the only thing lacking in the book was dialogue — it would have made the book & flow even more enjoyable and prevented a lot of repetitions.

*I should also add that poetry was included in some parts of the book, which I thought was a nice idea.*

Good one to the author. I look forward to reading more books from her.